Tom Cruise plays unbreakable secret agent Ethan Hunt for the fifth time, fighting enemies of international stability with all means necessary... and this time, with the help of fantastic BMW motorbikes and SIG Sauer pistols

But Ethan Hunt (Tom Cruise), the main IMF field agent, goes AWOL to proceed solo in his investigation against the so-called "Syndicate" − a dangerous group of highly trained secret agents, most of whom are officially dead while instead being very active in high-profile terrorist activities.

No more spoilers − you won't want us to ruin you the enjoyment of this Summer's movie blockbuster. But if you like action spy thrillers, let's take a look at some tasty treat that may make you want to go see this movie right away. 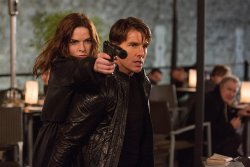 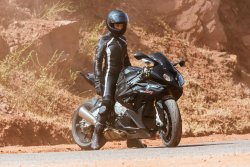 As in the tradition of the saga started with Brian De Palma's first installment back in 1996, 2015's Mission:  Impossible - Rogue Nation is action-packed: gunfights, breath-taking car chases, hand-to-hand combat and knife fights; international settings ranging between Belarus, Cuba, Morocco, and London; a charming British MI6 agent, Ilsa Faust (Rebecca Ferguson); and a little bit of spicy irony that's the trademark of the franchise.

Once again as in the tradition of the saga, there's guns and vehicles galore!

A handful of shining black BMW S 1000 RR  were prominently used in a car-chase scene shot in a curvy road just outside of Casablanca − boasting a V4, 999 cm³ in-line engine, they offer about 193 CV at 13.000 rounds per minute al minuto.

Okay, the Triumph company had provided a great Speed Triple model to the production of John Woo's "Mission: Impossible II" back in 2000, but this is almost on another planet.

As far as guns go, handguns are way prominent over rifles and carbines; and here we have a duel between SIG Sauer and Glock pistols.

But let's see what the good and the bad guys pack in "Mission: Impossible - Rogue nation"!. 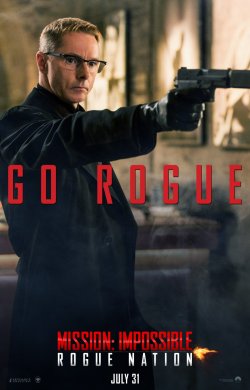 In the scenes set in the United Kingdom, the extras playing SCO19 (Specialist Crime and Operations Specialist Firearms Command) officers of the London Metropolitan Police are mainly armed with Heckler & Koch MP5 sub-machine guns, while the henchmen and enforcers of the "Syndicate" normally seem to pack the likewise compact AKS-74U small-sized assault rifles.

The Colt M4A1 assault carbine is instead issued to the extras playing the commandos storming Ethan Hunt's hideout in Cuba on behalf of the invece usata dai membri della CIA's Special Activities Division. Overall, that's an awful lot of firepower.

The movie does allow itself some liberties when it comes to guns; this is a spy story after all, and all spy-themed movies love to astonish the public with hidden, camouflaged or othwerwise disguised weapons. And you can rest assured, this movie is full of "impossible" guns assembled in seconds in the most odd ways and places, first and foremost during the scene depicting the attempt at the life of the Austrian Chancellor at the Vienna Opera House − carried on by a "Syndicate" hitman with a sniper rifle disguised as a flute. 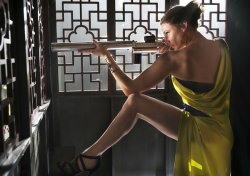 © 2015 Paramount Pictures - All rights reserved
One of the many custom prop guns appearing in the movie: MI6 agent Ilsa Faust embraces a sniper rifle disguised as a flute at the Vienna Opera House

During the same scene, Ilsa Faust assembles a very similar sniper rifle basically out of nowhere.

There's a small plot hole there − in that it's never understood where does she takes the parts from, although the movie appears to hint that somebody may have left a fake toolbox somewhere behind the curtains, containing pipes and tools that weren't pipes and tools at all.

But that's not all.

They're supposed to be an odd Mélange between tasers, electric pulse guns, and veterinary dart guns. As a matter of fact the movie has the subjects hit with those stun pistols not merely paralyzed, but also behaving as if injected with some sort of truth serum.

Nothing left to say here, except as usual... enjoy the movie!