"Spectre”, the twenty-fourth movie adventure of James Bond started worldwide in the cinemas in early November 2015. This is a great opportunity for all4shooters.com team to take a look at James Bond's weapons from 1962 to today

The first James Bond film was released in 1962 and more films were quick to follow the original Dr No. In the film, James Bond uses his legendary Walther PPK “with a Brausch silencer" which was assigned to the secret agent to replace a certain Beretta 6.35. We are told the reasons he no longer uses the Beretta is because it jammed and Bond spent “Six months in hospital".

Note that in the Italian dubbed version of Dr No, probably to avoid disputes with the Brescia gun maker, when Bond is ordered to hand in his Beretta he grumbles that "I've never missed a shot" and the gun brand isn't named, as it is in the original dialogue in English.

The armourer's explanation is that the Beretta has "insufficient stopping power" (and this is understandable) to declare immediately afterwards that the Walther is a gun "with a delivery like a brick through a plate glass window."

It is pretty hard to imagine a secret agent equipped with a 6.35 mm gun, whether the 418 or 950, both of which were in the Gardone manufacturer's catalogue at the time of the story. 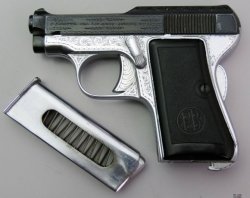 Gunstore Bunker
An engraved version of the 6.35 mm Beretta 418, probably used by James Bond before he switched to the Walther PPK

Both guns have an 8-short magazine, they can both certainly be easily concealed thanks to the compact design and they've got a good reserve in the magazine, but the calibre does seem to be a little small for the stopping power an agent licenced to kill might need.

To shroud Bond's original handgun even more in mystery, in the film The Living Daylights released in 1987, the opening credits clearly show the unmistakable silhouette of a 418 and a 950. 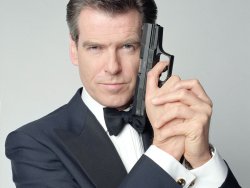 Time for a change

In the film Tomorrow Never Dies released in 1997, the eighteenth in the series, James Bond replaced his legendary Walther PPK with the new, high-tech 9 mm Walther P99 Parabellum.

At the time, production of the Walther PPK had been suspended for a few years and the maker wasn't sure whether or not the gun would go back into production. 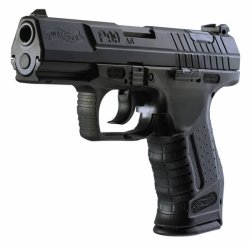 Despite the huge promotional campaign launched by the German company to celebrate Bond's new gun, the story goes somewhat differently.

In fact, in the film, James Bond (played for the second time by Pierce Brosnan) is not equipped with a Walther P99: he borrows one off the captivating Chinese agent Wai Lin, choosing it from a well-stocked arsenal as he says: "The new Walther! I asked Q for one.” Throughout the film there is no mention of the fact that the P99 is used by Her Majesty's secret service: on the contrary, the fact that Bond asked Q, his armourer and inventor of gadgets, for one seems to suggest it is a personal choice not contemplated as standard.

It is only in the next film “The World Is Not Enough” released in 1999 that James Bond can be seen right from the start of the film officially armed with the Walther P99. 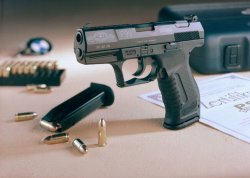 Immediately after the film, Walther sold a series of P99 handguns in a limited edition of 1,000 guns decorated with the On Her Majesty's Secret Service logo on the slide, which came with a certificate of authenticity.

Serial No. 007 was presented to Pierce Brosnan by Walther.

A second series of 1,000 "James Bond Model” P99s was never produced due to legal complications.

A few guns were apparently produced in a .40 calibre Smith & Wesson, which differ to the original series in that they have “one of one thousand” engraved on the left of the slide. Obviously these handguns have become coveted collector's items. 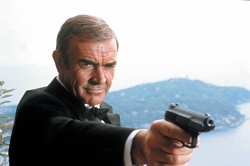 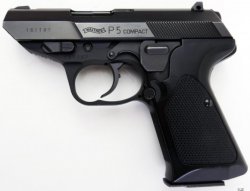 But true fans will have noticed an enigmatic “changeover” some years before, in which another gun, the Walther P5 Compact, played the role of protagonist.

In 1983, two James Bond films were released: Octopussy in which Bond was played by Roger Moore, and Never Say Never Again with Sean Connery returning to the role of 007.

The first film was produced by Eon Production, the production company that had produced all the Bond films to that date, while the second was an unofficial remake of “Thunderball”, made possible by legal loopholes.

Curiously enough, in both films James Bond uses a 9 mm Walther P5 Compact. By coincidence? Or an early attempt at “product placement?

At the time, the German company would certainly have wanted to promote what was a relatively new entry in its catalogue - an interesting handgun despite its old-fashioned concept, with a magazine holding just eight shots. However, the release of the Glock 17 in 1983 would change the handgun market forever.

Back to the past... and the future

In the reboot “Casino Royale”, released in 2006 staring Daniel Craig for the first time as James Bond, 007 was once more sliding a Walther PPK into his holster and driving an Aston Martin, perhaps in an attempt to go back to the original character's roots. It must be said that in this film however Bond uses both the Walther P99 and the 7.65 mm PPK.

Now that Spectre, the 24th film in the series, is being shown in cinemas all over the world, we can give you some interesting news on what is in the film.

James Bond (Daniel Craig) appears in the poster and in some scenes of the film armed with his iconic Walther PPK apparently without the “biometric” grips seen in Skyfall.  But in other scenes he is armed with the new 9 mm Heckler & Koch VP9 probably the first time it has been seen in a film), and last but not least with a Glock 17 pistol equipped with KPOS Perdonal Defense Weapon conversion kit which turns the handgun into a carbine. Mr. Hinx, who wants to make sure he never misses his target uses an Arsenal Firearms 2011 Dueller Prismatic, the innovative handgun created by Nicola Bandini.

This is not a debut, however, as the A1 version of the handgun was used (and shown in the poster) for the 2013 film “My name is Paul”.

Of Bond's alternative weapons, there is one that appears in as many as three films and apparently is kept in MI6's arsenal (or perhaps was what was available in the film studio's warehouse); the .22 AR-7 Explorer Long Rifle, which debuted fitted with a scope in From Russia With Love; for once this is quite a coherent choice for a secret agent although its ballistic performance has been overblown (Bond uses it to bring down a helicopter!)

In the film the gun is described as a ".25 precision rifle with an IR telescopic scope."

Bond says, "...we've only got one shot" suggesting the rifle is a single shot weapon, although its magazine holds eight cartridges.

The gun was very popular with fans and was used again in Goldfinger (1964) by the blonde Tilly Masterson.

The characteristics of this semiautomatic carbine, which can quickly be broken down and packed into the stock, to make it easier to carry and therefore easier for a secret agent to conceal. Oddly, Bond appears not to know about this main feature of this gun because in the film From Russia With Love it is carried in a professional but bulky case. The gun also makes a fleeting appearance in a scene of On Her Majesty's Secret Service (1969) and can be seen in the glove compartment of Bond's car, in the film played for the first and only time by George Lazemby.

A “Blooper” or "Goof" is an obvious error in a film or TV programme. Bloopers are often due to the fact that the same scene may have been filmed various times over a period of several days, and it is obviously hard to recreate everything in the scene exactly as it was, or sometimes they are simple mistakes made by the crew. Sometimes dubbing can introduce errors when the lines aren't translated correctly, and in some cases makes or models of guns are named which aren't effectively those that appear in the film. Let's look at some of the more obvious bloopers on weapons and how they are used. 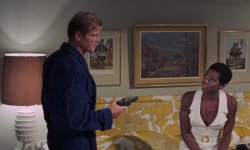 The mysterious "Custom 38 Smith & Wesson" revolver with its "safety" is really a model 19 .357 Magnum

In the film Live And Let Die a ravishing Rosie Carver enters Bond's room and points a revolver at him. After disarming her, Bond identifies the gun as a "Custom 38 Smith & Wesson". Bond's words are clearly misleading: no one really knows if he is referring to the calibre (.38 Special) or the model of the revolver.

There was a Smith & Wesson 38 revolver but it is completely different to the gun shown in the film, which is actually a model 19 .357 Magnum.

This gun later reappears on board agent Quarrel's boat: Rosy grabs the gun and threatens him with it, believing him to be an enemy. After they clear up the misunderstanding, Quarrel puts the gun back in place saying, "You could have killed me, if you released the safety!" But Smith & Wesson revolvers do not have a safety catch, except for the model 40 (which isn't the one used by the actors). 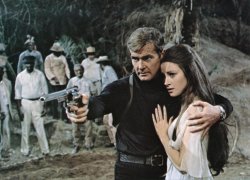 In the film "Live And Let Die", James Bond uses a revolver for the first time

In the same film, James Bond is armed with a big nickel-plated Smith & Wesson 629 .44 Magnum (which he throws away after firing the six shots in the cylinder) while the cover of the DVD shows Bond holding a Ruger .44 Magnum revolver, which never appears in the film.

A classic example of a dubbing goof can be found in italian version of  “The Living Daylights” when the arms dealer Whitaker highlights the features of a machine gun as being "303 maximum calibre" which was actually a "Maxim .303 calibre".

The goof on the poster of “From Russia With Love” (1963) is legendary, showing a smiling Sean Connery armed with a Walther LP53 air gun.

Another exception is the Browning 1910 handgun with a silencer used by Sean Connery in a scene of the film Dr No. This is an obvious goof as in the previous shots Bond is armed with his usual Walther PPK.

In the offending sequence, confirming the fact that it is not only in the books that there is an error almost every time a gun is mentioned, there is another goof: the bad guy professor Dent, armed with an easily recognisable Colt 1911, shoots into the bed where he believes Bond is sleeping but is then disarmed. After getting his gun back, Dent aims it at the secret agent but... click! The gun is empty! "It's a Smith & Wesson and you fired six shots ..." sneers Bond while keeping the bad guy covered with his Walther PPK, which is now a Browning... what a disaster!

Of the various weapons Bond's adversaries have used, the most bizarre are without a doubt the handgun used by Christopher Lee/Scaramanga in The Man With The Golden Gun and Oddjob's steel-lined bowler hat in Goldfinger.

Other unusual weapons that have appeared in the Bond film include the Gyrojet rocket-firing carbine used by the bad guys in You Only Live Twice and the Aqua Para underwater spear guns in Thunderball.