Entrepreneur Bernd Dittrich has been manufacturing firearms since 2003. His specialty: high-quality replicas of rare weapons or guns that have become rare – mainly from the military sector. Most people know the weapons reproduced in his models, which are manufactured in small series, from books and museums at best. The MP38 submachine gun, the FG 42 paratrooper rifle or the StG 44 assault rifle – take a journey through time with us. 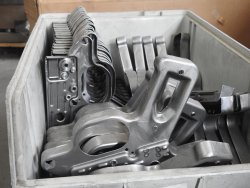 SSD Weapons: the beginning of the production of a civilian BD 44 replica – the halves of the future grip.

Piece by piece they are lined up. Shimmering silvery. Raw, blank, unfinished. They seem to be parts for the manufacturing of the grip of a StG 44 assault rifle. They still lack the surface treatment, they still have no inner life. It's a picture you think you know. From the relevant technical literature, where black and white photos show production lines from the Second World War. But here the impression is in color and quite real. A plastic box is the visible sign of modernity. How does this fit together? The riddle's solution is simple. What looks like a production line for the revolutionary rifle from the final phases of the war is actually a manufacturing station for the civilian semi-automatic replica of the assault rifle with the simple but memorable model designation BD 44. 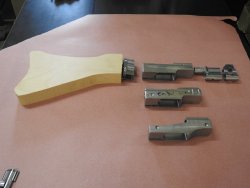 Bernd Dittrich stands for perfect replicas: various blanks for the BD 44, including receiver variations from the development history of the assault rifle.

The model designation is quickly explained: BD stands for Bernd Dittrich, the creator of this type of weapon. The number 44 comes from the former fully automatic military weapon that is the model for the BD 44 – the German Sturmgewehr 44. In combination, this gives an unusual creation for which it is not so easy to find a suitable designation. Replica, copy or reproduction? Somehow these designations only inaccurately fit Bernd Dittrich's work. The BD 44 is a semi-automatic rifle. Manufactured using sheet metal stamping technology like the prototype. With the same technical construction, the same operating system, even the same material. But not as a military weapon, not as a fully automatic, not in large-scale production. 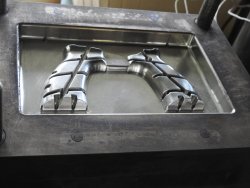 SSD has its own tool shop. Here the mold for the grip panels of the BD 42/II.

Dittrich currently employs 14 people and one employee at its Kulmbach site in Germany. In addition to weapons and weapon parts, the small company also manufactures machine parts. Currently, production orders from the mechanical engineering sector even make up the bulk of production. Only around 20 percent of capacity is taken up by the manufacture of firearms. This was not always the case. "In the early years," Bernd Dittrich sums up, "it was close to 100 percent!" That was no accident at the time. After all, it was precisely the desire to manufacture weapons that drove Dittrich to start his own company. The fact that today orders from the classic mechanical engineering sector are also served is more due to the current situation on the gun market.

How did Bernd Dittrich come to build firearms? 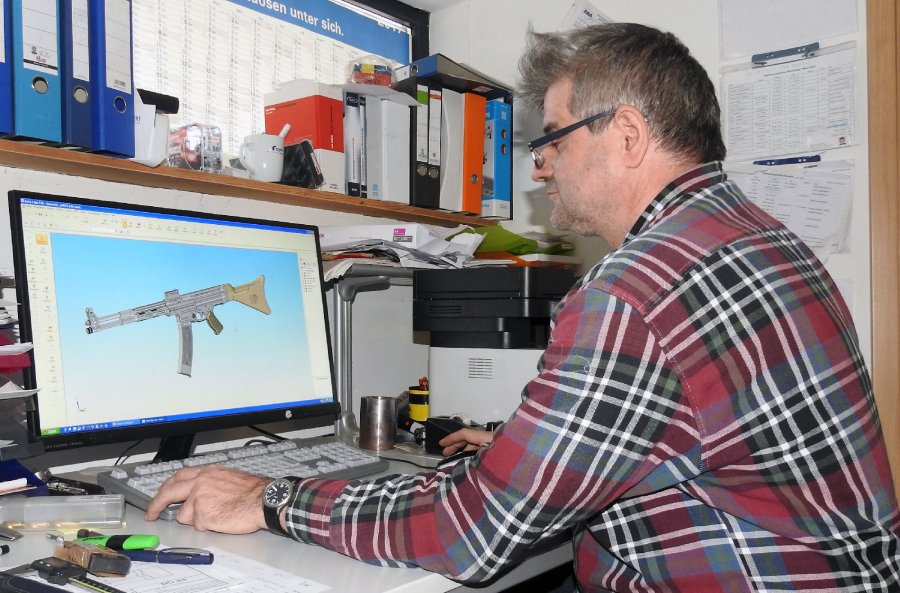 Bernd Dittrich at the computer. Although his firearms are perfect copies of historical weapons, they are created on the computer, not on the drawing board. 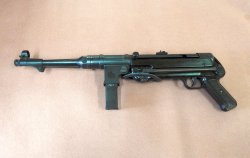 The first product of SSD Weapons: the BD 38 – recently offered with a short 10-round magazine.

"Even as a young boy, I was interested in firearms," says the company owner, explaining his motivations. But the search for an apprenticeship was unsuccessful, so Dittrich first completed an apprenticeship as a carpenter. When he became unemployed, he saw the chance of a lifetime: to turn his hobby into a profession. He wanted to rebuild rare weapons as close to the original as possible. As close as the law would allow. He was particularly fond of the Bavarian Werder rifle and the German MP38 submachine gun. He had studied both weapons in detail, and had made plans for a new production of both guns – the MP 38, of course, not really as a submachine gun, but as a semi-automatic gun. In 2003, the decision was quickly made. The replica of the MP 38 was to be the start of his weapon production. A deactivated parts kit formed the template for his first own gun. After some searching, a sponsor for the project was found.

Bernd Dittrich is a perfectionist. From the idea to its realization, he sifts through originals, studies plans and drawings, and retraces production processes. This ultimately becomes his project. Clarifying the legal framework, planning technical changes, coordinating with the authorities in order to be able to create a legal product. Along the way, Dittrich has become a weapons historian. 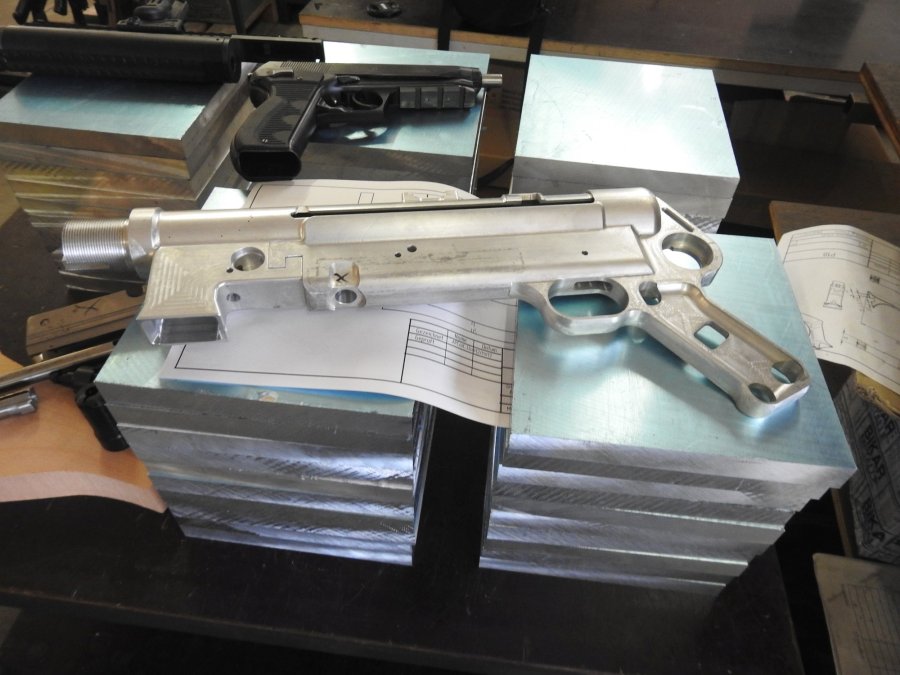 The receiver blank for a BD 38. In the background, the new interpretation of the Steyr GB 80, whose exciting gas-delayed blowback action also appealed to Dittrich.

It lies heavy in our hands as we take it out of the gun rack. The left hand reaches up to the magazine well and lifts the BD 38. Then the right hand follows, grabs the grip and now actually rests on Bakelite. This plastic – widely used in the 1920s and 1930s – has now disappeared from the market. But using a modern plastic for the grip panels and the foregrip was out of the question for Dittrich. His weapons should also correspond to the original in terms of the type of production and choice of materials. That is why SSD Weapons today produces not only metal but also plastic parts. In keeping with the times, they are made of Bakelite. Dittrich estimates that in-house manufacturing for his weapons tends toward 99 percent. Only barrel blanks and coil springs are bought in, and bluing and phosphating are sometimes outsourced. 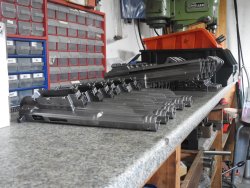 SSD Weapons: this is where the receivers for the BD 42/II, the semi-automatic replica of the FG 42 Paratrooper Rifle, are manufactured.

This enormous in-house range of manufacture can also be seen in the company. The aforementioned blue plastic boxes contain gun parts in various processing stages – from the blank to the ready-to-assemble component. The machine park shows a similar bandwidth. The inconspicuous premises contain a modern 5-axis CNC milling machine as well as a Bakelite press rescued from an old press store or a sheet metal stamping press. Bernd Dittrich is particularly fond of sheet metal stamping technology – and it has already been used in another project, the BD 44 already mentioned at the beginning, the semi-automatic replica of the Sturmgewehr 44 assault rifle. Of course, the company has its own toolmaking shop, which is indispensable for the stamping sector in particular. As an aside, when Dittrich calculated the tool set for his BD 44, he came up with the sum of 800,000 euros. In addition to toolmakers and millwrights, the staff also includes an automotive mechanic and, of course, gunsmiths. Bernd Dittrich started his training as a carpenter and went on to become a master carpenter, master precision mechanic and master gunsmith. During his training as a master craftsman, he also learned design and today, although he is interested in traditional manufacturing methods, he uses a modern CAD software to design the individual parts. 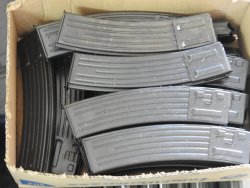 Now only for the export market. 30-round magazines for the BD 44.

In addition to the BD 38 and BD 44 already mentioned, the projects already completed include the BD 42 – replicas of the Fallschirmjägergewehr 42 paratrooper rifle. Why the plural? Because Dittrich has replicated several models at once. Besides the well-known but extremely rare first model with the unusually angled pistol grip, also the third model with a more conventional grip, which was produced in somewhat larger numbers. Dittrich has also already taken on a replica of the German imitation of the British Sten-MP, which became known as the "Gerät 3008", or a little-known variant of the MP 38 with a receiver made of light metal – easily recognizable by the lack of a Bakelite stock. 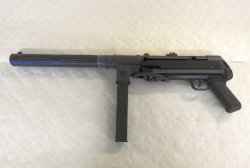 Not just old things are available at SSD Weapons. This BD 38 was fitted with a newly developed suppressor.


However, Dittrich has not remained in the past with its firearms production. Thus, based on the replica of the paratrooper rifle, modern self-loading rifles were also produced. There is a reinterpretation of the GB 80 pistol once manufactured by Steyr in Austria with a gas-delayed blowback action, and a few years ago, together with a development partner, he introduced his idea of a combat-grade MG 3 machine gun. It is precisely this gun with its elaborately sheet-metal stamped receiver that he is particularly fond of. As a result, he is now familiar with almost all the problems that have arisen in the many years of use of this weapon and can even come up with concrete suggestions for improvement.

At the end of our visit, our eyes wander once again over the many blue boxes with raw gun parts.  It is like a paradox: here, production methods of large-scale production are found in small-scale production. But this is the only way to make Bernd Dittrich's wish come true – the perfect copy. Marks of the stamping tool included.

On the SSD Weapons website you will find many historical and modern firearms including prices.

Subscribe to the Newsletter
This article is also available in this language:
DEIT
Click here for more information on the topics:
CulturePro-zone
That might interest you too: