Breaking: horror attacks by the undead reported - protect yourself!

+++ Breaking News +++ Watch out! Enigmatic attacks reported in Europe and the US - Several reports of horror incidents by strange human (?) subjects received - Terrible figures attack passers-by - attackers seem to want to eat their victims (sick!)! – Here’s what you (possibly) can do for your safety.

According to previously unconfirmed reports, eyewitness reports of attacks are piling up throughout Europe, the US, and even in some parts of Asia and Oceania - as all international press agencies inform.

All4shooters.com has also been given descriptions of alleged attacks since the early hours of the morning: several readers report that they have observed how severely neglected individuals approached passers-by in an aggressive and uncanny way. 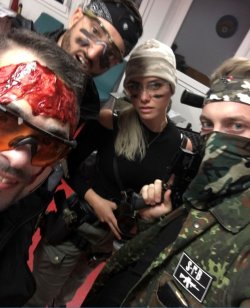 Mr. and Mrs. Smith
The anti-zombie team remains motivated despite setbacks: a member got it. Hopefully, there is no infection with the undead virus - we wish all the best!

In the process, these strange individuals reportedly emitted ghastly sounds (moaning and wailing, disgusting!) and moved awkwardly, but purposefully, towards the frightened people. However, some eyewitnesses also mention dreadful creatures that moved much faster.

Both types observed seem to be looking for food! They make a very bad overall impression: it seems like they are alive but in a state of decay!

We regret to inform you that at the moment, according to current accounts, we assume that the creatures are supposedly approaching innocent people with cannibalistic, we repeat: cannibalistic intention!

Large numbers of such creatures were sighted in the countryside near most urban centers everywhere across Europe and the US. Numerous eyewitnesses report further groups of such creatures that have to shuffle through the streets to move. Civil Protection recommends just this: Stay at home! Lock doors and windows! Turn on the radio and wait for further instructions.

How did the horror catastrophe come about? 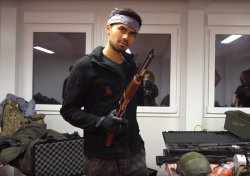 Mr. and Mrs. Smith
The world perishes with style - a member of the anti-zombie team poses cool despite the imminent apocalypse. That's right, just do not be discouraged!

What led to the appearance of these frightening figures? Rumors / spoilers follow: is it due to increased radioactivity caused by an alleged satellite crash? Did wrong biogenetic experiments lead to monstrous mutations? Is the use of mobile phones not as technically harmless as assumed? Have general nutritional advice and popular food blogging failed? Has the excessive use of Internet anything to do with it?

All hitherto sighted undead seem almost never to lie on their lazy skin. They move in hordes, the indiscriminate greed for (human) flesh drives them! Prof. Dr. Gonzales from the Federal Research Institute for Biogenetics and Human Monkey Studies summarizes his observations of the incidents as follows: "These things eat to eat, to kill! A horrible procedure, that makes you think." 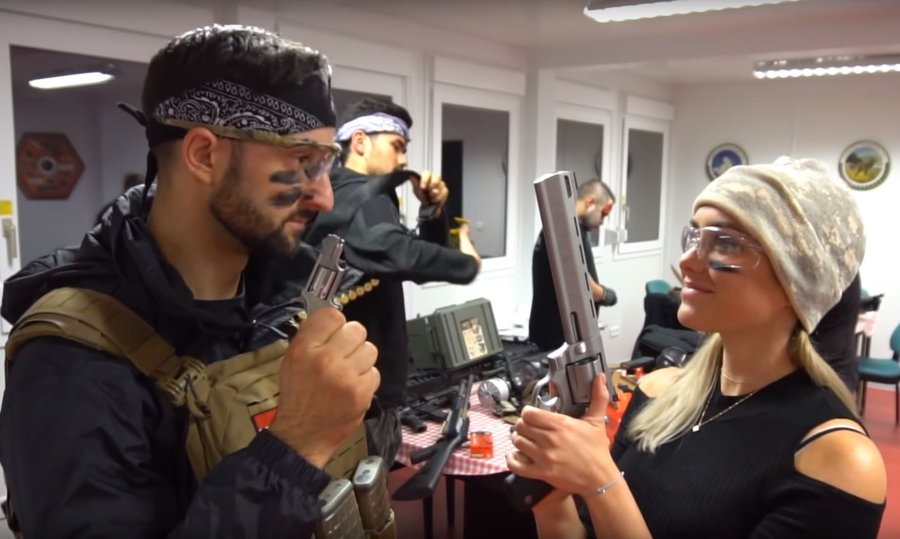 Mr. and Mrs. Smith
Anti-zombie members with different sized handguns: all has its advantages and disadvantages. Practice aiming - even the biggest caliber will not work if you are unable to hit the target!

Our colleagues are already equipping themselves with survival equipment and "light to heavy equipment". Watch our video as they prepare for a coming attack by the undead:

Who or what are the attackers?

Such incidents are by no means new: comparable attacks by such beings have been reported repeatedly. There were secret reports, rumors, denials. As far as the origins of the weird, confused or furious ones are concerned, there are different views in research, in government, in the military, but also in the folkloric tradition.

In fact, US scientists have been investigating similar phenomena over the past 50 years. Of course, their research into these incidents has always been top secret, but now, in the face of today's events, we at all4shooters.com will provide you with all the information we've collected since the late 1960's.

To summarize: The phenomenon indeed consists of people who are neither dead nor alive. If they were dead, they would lie down and not want to eat. If they were alive, they would not rot. So you are dead: the living dead!

Mr. and Mrs. Smith
The entire anti-zombie team during the night's Range Day (Night). Hopefully nothing is coming from the back or the sides right now! Do not forget to look over your shoulder from time to time. Wear ear protection, so that you don't hear the loudest undead!

This has a dangerous, destructive effect. The look of the undead is monstrous, while their brain is already turned off. Nevertheless, the (renewed?) final destruction of the undead brainby violence seems to be the only way to stop these beings. Resocialization attempts have failed due to impatience and difference of views so far.

Reader John B. from H. writes to us:

What does all this mean?

How can you arm yourself against the attack of the undead? 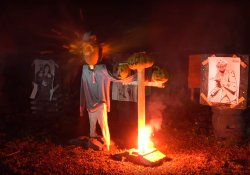 Mr. and Mrs. Smith
Headshot! The pumpkin head of an undead dummy is hit. The pumpkin is most likely as hollow as a zombie brain, scientists suggest.

The situation is serious. We can’t rule out that you must defend against these beings by force of arms. To play it safe, it is advisable to train your accuracy.

For shooting training the proven Geco ammunition is particularly suitable. The high quality and great shooting performance of Geco cartridges have been pleasing both sports and hunting shooters for many years. This covers all relevant areas of application such as precision shooting, dynamic sports disciplines, hunting protection and self-defense.

Oh well, before you think you’re under attack by the undead: remember that today is Halloween too. So, before panicking make absolutely sure that they are not fellow human beings who have disguised themselves as so-called "zombies" (known from horror film and television)! 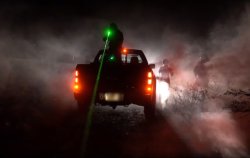 Mr. and Mrs. Smith
A team fast car must not be missing in professional combat against danger. Many undead are unable to reach even an idling vehicle - easy play. But there are also much faster zombie variants!

Disguises as scary characters are a traditional custom at Halloween. These can indeed be deceptively similar to the terrible horror attackers described above!

Please find out IN ANY CASE if you are facing a soulless undead who wants to gut and devour you or if it is "only" a fellow human being (e.g. colleague / partner / grandma / etc.) who just "jokes" / wants to go to a Halloween party / "slept badly" / etc.!

We wish you all the best, a safe hiding place and good luck! Stay positive despite everything! Our motto: ready or not, here they come: It's zombie-time;)

You can read everything about currently popular topics such as shooting training, ammunition selection and survival equipment here with us (as long as our servers have power).

Wait - my boss is just coming in. There are probably updates on the situation in - oh, Mrs. Smith, what's going on? Are you okay? Oh god, you look awful - what the ... OH NO, what do you want?? STOP! HEY!!! AAAAAAAAAAAAAaaaaaarrrghghjklfnlnl

Subscribe to the Newsletter
This article is also available in this language:
DEIT
Click here for more information on the topics:
CultureGeneric NewsAmmunition
That might interest you too: