Vasily Mosin reports from his participation at the meeting of the ISSF Ad hoc Committee in Munich, as a representative of the initiative group, following the invitation of the ISSF Secretary General Mr. Franz Schreiber

In this video, I reported the views of a broad shooting community on the fate of Double Trap and, while authorities and members of the Ad hoc ISSF Committee are involved in the discussion on the Olympic fate of my beloved discipline, let me start a series of articles on international Trap, Skeet and Double Trap competitions - which are conventionally called Grand Prix.

Ольга Камардина
All the flags welcome us.

Like flocks of migratory birds heading South following the sun, following their passion for crashing targets into orange dust , hundreds of  shotgun shooting enthusiasts are led to the island of Aphrodite.

They fly to Cyprus from around the world according to a long tradition for its warm weather, carefree and friendly atmosphere, traditional hospitality and opportunity to prepare for the upcoming sports season.

The unique geographical location at the crossroads of routes from Europe to Asia, the ease of crossing the border with guns, affordable ammunition and targets, the abundance of hotels and, most importantly, shooting ranges of Olympic level has already earned Cyprus its reputation as the best place for training in the winter.

Almost every large (by Cyprus standards) town of the island has at least one shooting range, and in Limassol and its vicinity, to the best of my knowledge, two! Thanks to this abundance, the athletes had a unique opportunity to train on all known equipment whether it is throwing machines made by Nastakiekko Oy Ltd., Laporte-CPC, Mattarelli Srl. or electronic equipment: E. P. Elettronica Progetti s.r.l., Maxima Warenhandels GmbH.

But lets focus on the wonderful Grand Prix of Cyprus tournament in Larnaka, which opened the 2017 Olympic shooting sports  International shooting season. 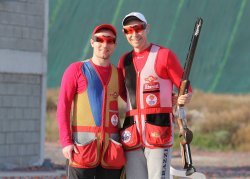 Ольга Камардина
The winners of the qualification in Double Trap: A. Furas’ev and V. Mosin, both from Russia.

The fact that in April 2017 the same shooting range will host the Shotgun World Cup under the auspices of ISSF added the topicality to the competition. Therefore the geography and number of participants was unprecedented: more than 20 countries, nearly 600 athletes!

Already a week before the official training the shooting range in Larnaca was packed. From early morning until sunset shots did not stop in the six combined ranges.

Athletes discussed actively the latest news about the ISSF decision concerning Double Trap. All unanimously spoke in support of the proposals of the initiative group on the modification of this discipline into the mixed team event. In between shooting rounds, the athletes showcased novelties: the Perazzi team - a revolutionary new HT line, the Beretta team - DT11 Black Edition. New cartridge manufacturers' products, from such world leaders as  RC Cartridges, FIOCCHI, and Mirage were discussed.

The shooting club in Larnaca has a sighting shield, anyone can pick up a cartridge individually and then verify the correctness of their choice in practice.

The participation of a number of world stars: Olympic champion of OG Beijing 2008 Satu Mäkelä-Nummela, Bronze medalist of OG London 2012 Vasily Mosin, and members of the main composition of national teams: George Achilleos (Cyprus), Nikos Mavromatis and Mitas Efthymios (both of Greece), Sami Ritsila (Finland), Ray Bassil (Lebanon), Hubert Olejnik (Slovakia) and many others raised the status of the tournament.

Everything was for shooters and shooting sports: the festive atmosphere, the sunny weather and the fickle sea breeze periodically affecting the target trajectory. Already on the first day of competitions six sets of medals (in threes) were competed for in women's Trap and men's Double Trap. Please see detailed results of the tournament online here.

Special thanks go to the tournament organizers for the excellent work of the judges reinforced by the participants of the judges seminar training for the World Cup in 2017, which will be held at the shooting club Lisya Nora, Dmitrov district of the Moscow region.