No wonder this whimsical semi-automatic rifle from U.S. manufacturer Calico has been featured in several very well-known science fiction flicks. And those often ridiculed movie guns that never need reloading – they obviously do exist. We took a closer look at the 100-round M-100 rimfire rifle.

Marcus Heilscher
The cocking handle is located on the left side. Since a double-sided safety lever and a double-sided magazine release are provided, the Calico can be used as a left- or right-handed gun.

If guns had pores, it would come out of every one of them in the Calico: the fluid of the belief in progress, which to this day belongs to the American way of life like rock and roll to the petticoat. And time and again, non-conformist inventors are found in the USA, who build relatively useless accessories onto relatively useful things, and thus achieve success. In the past, it was tailfins on cars. But much rarer are the hitherto unimaginable technical innovations that are packaged in a rather unusual design. Once this happens, and more importantly, works flawlessly, it can result in something like the Calico M-100.

And then it happens quite quickly that such gun designs as Calicos appear in some well-known science fiction movies like Spaceballs, Star Trek, Robocop or Total Recall – not to mention several dozen other action movies. Yet a Calico is by no means a functional design study. In addition to its futuristic appearance, the California Instrument Company (Calico) had implemented some truly groundbreaking developments around 1982, most notably the 100-round helical magazine. In the USA, the sharp rimfire rifle is still sold today. 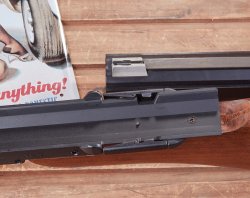 Marcus Heilscher
There's no wobbling on the Calico M-100: the magazine is guided by two rigid catches, one at the front, not in the picture, and held by the two movable pins.

High-capacity magazines were old hat back around 1980. But high-capacity stick or drum magazines also have their drawbacks: very long stick magazines are useless for prone shooting because shooters have to expose themselves a lot. Drums instead widen the gun extremely. Calico's new helical magazine, on the other hand, allowed an enormous capacity with a very slim and flat design. Calico was right from the start to focus on the law enforcement and military market. After all, the elaborately manufactured helical magazines functioned flawlessly. But as is so often the case, the costs put a spanner in the works. Government procurers found the magazine interesting, but far too expensive. And under the Federal Assault Weapons Ban, a cheap ten-round magazine could still be sold in the USA from 1994 onwards, but an expensive helical magazine that had been reduced to a capacity of ten cartridges could not. The helical magazines form the central component of these rimfire guns, which are used more for recreational purposes in the USA, quite in contrast to inexpensive stick magazines. Even today, a new .22 LR helical magazine costs about $125 – for that you can buy a cheap plinking rifle in the U.S. and a used Ruger 10-22 can be had for about $250. So the Calicos had no chance on the market after 1994.

Marcus Heilscher
From Russia with love: the front sight of the Calico M-100 is height-adjustable in the AK manner with a positive click action. The rear sight can also be windage adjusted by rotating a precise knob.

Today's innovations: the Calico M-100 already had this feature since the mid-1980s

The left-handed operability that is so often and loudly sung about today – with Calico, this had long since been achieved by 1985. The magazine releases are available on both sides, as are the safety catches, the bolt catch is centered in the front of the trigger guard, and the cocking handle on the left side does not bother right-handers in the least. The fact that even the windage adjustment of the rear sight can be operated from both sides has hardly been implemented by any manufacturer to date. In addition to all the innovations, Calico also focused on material high quality. Even the barrels of the rimfire versions were made of chrome-molybdenum steel, and the A 356 .0 aluminum alloy (today 7Si-0.3Mg) is used both in the petrochemical industry, in nuclear plants, in aircraft construction, for fuel pumps or clutches. In addition to the basic quality of the materials, the quality of workmanship in detail is also right. For example, the height-adjustable front sight: a tiny pressure pin ensures a defined and, above all, safe detent of the set height. The rear sight blade is also adjusted using a click mechanism. Old as well as current Calico productions are characterized by a large variety of models in many different colors. Within the new productions, there are also those for quite exotic color sensibilities, such as "Black and Plumb Crazy Purple".

Not only because of the – then as now – quite wide range of pistols, carbine rifles and rifles, the test gun represents a quite rare variant of the old Calico M-100 series, namely the model 105. This all4shooters.com sample dates back to the early days of the first manufacturing era. The number 105 identifies the carbines with walnut stock that were manufactured exclusively in 1986. This makes the rifle look quite rustic compared to the skeletonized or AR-15 styled variants. Most likely, the relatively expensive wooden stock on this variant also did not seem futuristic enough to Space Cowboy buyers at the time. Despite the surprisingly high workmanship quality, the testers found a point of criticism: because of the somewhat tall helical magazine: the ergonomics take some getting used to when you get to grips with it. The very short sight radius is due to the elongated magazine, on which the developers probably did not want to place a rear sight. On the other hand, the rectangular rear sight coupled to the simple front sight post offers a very good, clear sight picture.

The Calico semi-automatic rifle on the shooting range 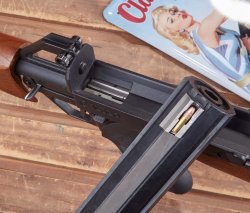 Marcus Heilscher
This is how the magazine loading port looks for up to 100 cartridges. Since there is no button for lowering the follower, completely filling the Calico M-100 magazine is a fiddly matter of almost ten minutes.

There, the answer to the questions of how to push 100 cartridges into the helix magazine – and how long that takes – was awaited. The first 30 cartridges hardly cause any change in the spring tension. It is not until the second cartridge box that a higher resistance is encountered, but this does not increase significantly in proportion. Only the last dozen rounds require more force. But felt, it is not much more than the last cartridge in a ten-round magazine requires. With the Calico magazine, the cartridges must be pressed precisely onto the follower through a defined, angled port. If the magazine is tilted up or to the side, it jams – not for the faint-hearted. A few sheets of kitchen paper to get the bullet grease off the fingers after 20 to 25 cartridges are quite helpful. During the prolonged loading, a saying ran through the minds of some testers: "load on Sunday and shoot all week long" – this saying referred to the 15-round Henry Rifles Model 1862. These may have made a similar impression in the muzzleloading-dominated era of the U.S. Civil War as the Calico did some 125 years later: a gun as if from another star. The .44 Henry cartridges were also rimfire, representing a concept that is now almost 180 years old and still functional.

Marcus Heilscher
With a magazine mounted above the bolt (as with the Calico) the rounds point downward.

American rimfire semi-automatic rifles for plinking do not always work trouble-free with European match ammunition. To check this more closely, we initially put only ten cartridges each of RWS Rifle Match and Lapua Biathlon into the Calico M-100 magazine. However, none of this was a problem: not only did both types work perfectly, but the groupings were also much smaller than expected. To be on the safe side, we now stuffed 50 match cartridges each into the magazine and shot them without any problems either. There was not a single flaw in the further course of the test.

The futuristic and playful impression is deceiving: Calico manufactured high quality rimfire rifles with a magazine that is hardly known until today. Long before emphasis was placed on ambidextrous operability, Calico relied on this concept. The manufacturing quality was clearly above that of plinking rifles. This, in addition to the elaborate magazine, justified the rather high new prices of $600 to $1,000 for this special rimfire gun.

Subscribe to the Newsletter
This article is also available in this language:
DEIT
Click here for more information on the topics:
RiflesSemiautomatic rifles.22 Long Rifle
That might interest you too: 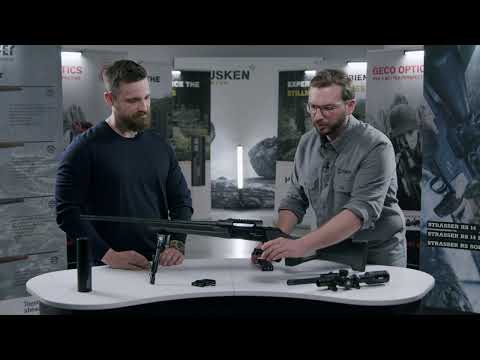 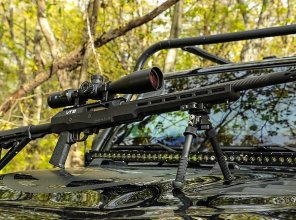 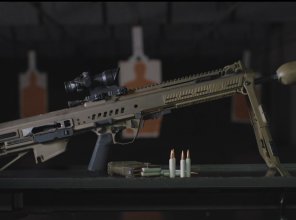 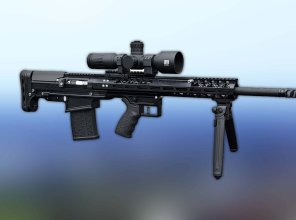 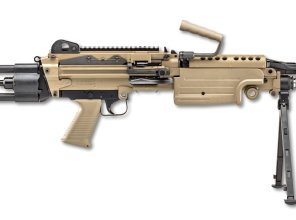