What exactly is a “long-stroke gas system” in a self-loading firearm? Let’s take a look at a brief video in which we show how it works and what its advantages are.

Andrea Giuntini
A rare AK 47 Type 1B assault rifle, one of the first built. It's the most famous and widely produced firearm using the long stroke piston gas operating system.

In a self-loading semiautomatic or fully automatic gun, a gas-operated reloading system uses the pressure of the gas of the burned propellant from the cartridge bled off the barrel to operate the locking system and cycle the firearm.

A long-stroke gas-operated system uses a piston to operate the firing cycle of the gun. The system is called “long stroke” because the piston is permanently or mechanically fastened to the op rod and then to the bolt / bolt carrier in such a way that the piston itself travels with the carrier during the whole functional cycle.

The most famous gun using the long stroke system is obviously the AK47, but many other guns, such as the M1 Garand rifle, FN MAG and Minimi machineguns also use it. 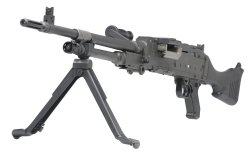 The  FN Herstal MAG (Mitrailleuse d'Appui Général) machine gun in 7.62 is based on the long stroke gas piston system.

The main advantage of the long stroke system is that, since bolt carrier, op rod and piston are assembled in a single part, and move during the whole firing cycle, the added mass of the assembly increases momentum and therefore increases reliability of the firing cycle without adding to the total weight of the firearm. 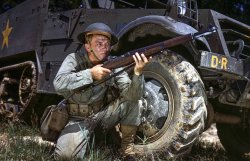 Main disadvantage is a lower inherent accuracy, due to a larger moving mass influencing control of the firearm – especially at the start and ending of the bolt travel – and the gas block acting as a fulcrum lever that heavily influences the barrel during shooting cycle.

To illustrate how the system works, all4shooters.com made a brief video: enjoy!

In the video, the gun we used as an example is a fairly rare SIG Sturmgewehr 540, a 5.56 caliber assault rifle that was the base for the more famous 550 or Sturmgewehr 90 of the Swiss Army. Manurhin manufatured the weapon under SIG license for a short period for the French army as temporary service rifle before the adoption of the FAMAS in the early 1980’s.

Subscribe to the Newsletter
This article is also available in this language:
IT
Click here for more information on the topics:
CultureAccessoriesAK-47 Kalashnikov
That might interest you too: