89th auction at Hermann Historica next May 28, 2021: we present some special pieces!

On May 28, 2021, the Hermann Historica auction house will once again auction off the finest gunsmithing art. Under the title "Firearms from five centuries" there will be 1044 lots up for auction. We present some of the most interesting historical firearms here on all4shooters.com and tell you where you can order the auction catalog or find the digital version. 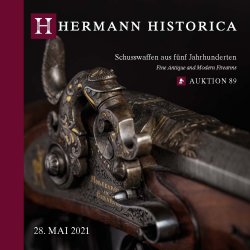 Next auction on May 28, 2021: you can order or download the catalog here at Hermann Historica.

The catalog of the 89th Hermann Historica auction – "Firearms from five centuries":

Hermann Historica's 89th auction starts with a novelty already in the catalog, because for the first time all firearms are combined in one catalog – even those that were formerly found under "Arms and Armour". With 1044 lots, the "Firearms from five centuries" catalog comes to 627 pages. Printed in a 22x22 cm format on glossy paper, you can order the catalog from Hermann Historica for 25 euro.

89th Hermann Historica auction on May 28, 2021: when are the viewing dates and how can I place bids?

The 89th auction is designed as both a presence and online auction. Hermann Historica offers you the following participation options:

So as you can see, despite the Corona pandemic, there are a variety of ways in which you can bid for your desired items. Hermann Historica will keep you informed about current regulations regarding Covid-19 here.

Selected lots of the May auction at Hermann-Historica 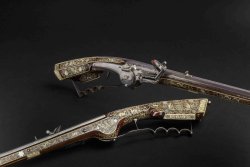 Lot 2072 is a pair of wheellock carbines, circa 1640, originating from the Silesian town of Cieszyn (Teschen), known since the 16th century for the manufacturing of prestigious and luxurious hunting rifles. The origin is also reflected in the fine bone and mother-of-pearl stock inlays with the city coat of arms of Teschen, as well as wild and mythical animals and ornamental scrolls and tendrils. 65,000 euro is the price asked at the start of the auction for the pair of carbines.

About 40 years younger and for "only" 32,000 euro, Hermann Historica offers a pair of Silesian flintlock pistols. These are also richly decorated and correspond to the spirit of the time with bone inlays depicting flowers, animals, grotesque heads and musicians as well as a fire gilding. They also include wooden ramrods with engraved bone tips. They are available at Hermann Historica as lot number 2147. 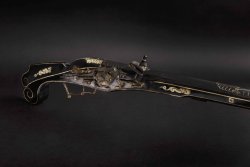 In southern Germany area, a deluxe Renaissance wheellock rifle was made around 1600/1610 (title image, see above). You will find the wheellock rifle with the finely engraved and chased ornamentation at Hermann Historica under lot number 2067. Besides Jupiter in a chariot drawn by lions, there are several animals and grotesque heads in the full-surface decoration on the original blued background. In addition, there is a generous gilding. The Renaissance wheellock gun has a starting price of 28,000 euro.

Dating from 1570 is a very early German matchlock/wheellock musket from Suhl. It bears the master's mark "TB" and is in original condition with original ramrod. The partially gilded matchlock musket with bone inlays in the form of mythical creatures is listed under lot number 2062 at Hermann Historica for 25,000 euro. 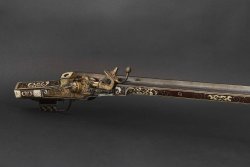 A Schönberger-Laumann Mod. 1894-II pistol in 8 mm Schönberger caliber is up for auction under lot number 2554. The Mod. 1894-II is the world's first sem-auto pistol and the piece in question is number 16, the specimen described and illustrated in detail by Joschi Schuy in the book "Vom Ursprung der Selbstladepistole". It is also one of only six known examples of the Mod. 1894-II in the world. Despite this rarity, the pistol starts at 18,000 euro in the May auction.

Even rarer is the Mauser Model 27 semi-automatic pistol. The previously unknown prototype is most likely unique and bears the serial number 1. The pistol in 6.35 mm Browning was submitted to Mauserwerke in 1970 for assessment. There, Director Vorgrimmler confirmed the authenticity and signed the assessment. These documents and other correspondence with background details are included with the Mauser Model 27. For lot 2469, 15,000 euro are asked – who will bid for this unique piece of German gun history? 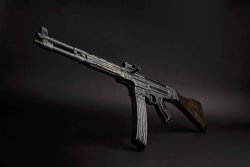 © Hermann Historica
Not even 12,000 examples of the Haenel MKb 42(H) were produced for a troop trial.

The then Haenel chief designer Hugo Schmeisser developed the fully automatic machine carbine Haenel MKb 42(H) after 1938. Haenel produced 11,808 examples with the Frankfurt-based sheet metal stamping specialist Merz for a troop trial. However, the MP 43/44 and K 43 models were preferred at that time. The present piece bears the serial number 9492, the mirror-finished barrel having the same number. The magazine holds 30 rounds in 7.92x33 short caliber. Hermann Historica describes the condition of the MKb 42(H) as follows: "The exterior of the rifle with remainders of bluing, heavily spotted, some pitting, the inside in very good condition" and sees opportunities to improve this rare rare collector’s piece “by careful cleaning, restoration and rebluing”. Lot number 3006 is valued at 15,000 euro. Important. the buyer must observe the national regulations regarding fully-automatic firearms.

Lot 3028, an interesting  Walther P38 "solid top" experimental pistol, is likely to become the star of the auction. This prototype was an attempt to simplify the complex slide of the P38 and is the only one known to exist. It is illustrated and described in Warren Buxton's book, “The P. 38 Pistol, Vol. 1”, on pages 272-275. Built in 1944 or 1945, this 9x19 caliber prototype has a flattened slide with no chambered round indicator and an unprecedented rear sight design. The serial number is 27016 and the only marking, on the left side of the barrel, is the eagle with the number 359, Walther's acceptance mark. Surely it is the result of an experiment to speed up the production of the gun in the final stages of the conflict. The starting price for this rarity is 6000 euros. 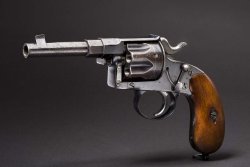 An interesting prototype of a German M 83 service revolver.

Lot 2980 is a Reichsrevolver M 83 trial gun in 10.6 mm caliber, which was the standard issue handgun of the German Army from 1879 to 1908, when it was replaced by the semiautomatic Luger. This gun is completely devoid of markings and acceptance marks and was probably built in the rifle factory at Erfurt for military testing. This same example is illustrated and described in detail in the volumes: Müller, "Geschichte und Technik der europäischen Militärrevolver", vol. 1, p. 176-177 and Harder, "Der Reichsrevolver und seine Varianten", pp. 120-121. It retains much of the original bluing and features oil-finished walnut grips. The starting price of this unique piece is 4900 euros. 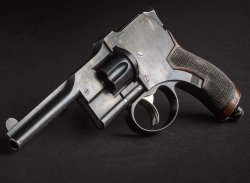 Lot 2884: patented in 1885 by the Romanian Army Captain Haralamb Dimancea, this unusual Kinoch Dimancea hammerless revolver was proposed to the Romanian and French War Ministries, who put them to trial. Manufacturing was entrusted to two important names of the arms industry of the time: Kynoch and Gatling Arms Company of Birmingham, that built a total of less than 1000 units. Due to technical difficulties, production of this revolver with a disorienting appearance was halted and neither of the two armies adopted it. The gun is in .380 caliber, and some examples were certainly made in .45 caliber as well. The starting price for this extravaganza is 4000 euros.

A MATEBA MR-8 revolver in .38 Special, with 8-round cylinder.

Lot 2540 is an old acquaintance for Italian enthusiasts; a MATEBA MTR-8 revolver in .38 Special caliber produced by the Italian company in 1984. Characterized by the 8-rounds cylinder in front of the trigger guard, it was Emilio Ghisoni's first experiment with this very special design, which with subsequent refinements is now embodied by Chiappa's Rhino revolver. The barrel measures 3 inches (75 mm) and the grip is in one piece, made of walnut wood. In this case we are dealing with an example in perfect condition, with serial number 150, complete with two cartridge discs, in an original and complete packaging. The starting price is 2500 euros. 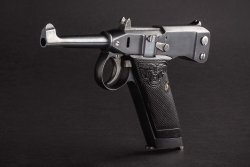 Lot 2442: Another unusual pistol from the beginning of the 20th century is the Adler (Eagle) in 7.25 mm caliber marked Adler Waffenwerke and produced in 1906 in Zella St.Blasii. Designed and patented by engineer Haeussler, this small blowback action pistol is extremely rare, especially in this condition. A prototype in 5.5 mm caliber is also known, but little else is known about it. The serial number is 1136 but in reality less than one hundred guns were manufactured. Starting price: 6000 euros.

For further information about the 89th auction, please visit the Hermann Historica website. We will add to this article in the coming weeks and also present more interesting collector's guns from this auction on our Facebook and Instagram channels.

Subscribe to the Newsletter
This article is also available in this language:
DEIT
Click here for more information on the topics:
CultureHistorical Firearms
That might interest you too: