Intermediate cartridges stem from analyses conducted on battlefield operations in the first third of the XX century, proving that most of the combat action took place whitin a range of 300 meters

The most widespread military weapon in the first third of the XX century was the bolt action rifle: chambered for powerful cartridges such as the 30-06, the .303 British, the 7.92x57 Mauser or the 7.62x54R, this type of gun was effective up to 1000 yards (and some rifles carried rear sights which could allow shooting well beyond that limit, at least in theory). 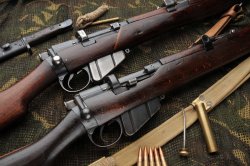 During WWI soldiers on both sides were armed with long, heavy bolt action rifles like this british Enfields n°1 Mk.III in .303

Long and heavy, it was an unwieldy and cumbersome weapon, whose rate of fire, in skilled hands, was in the range of 20 rounds per minute. Even the Lee Enfield, famed for its high rate of fire thanks to its extra-smooth and fast action and its 10 rounds magazine (double the capacity of most other contemporary military rifles) could hardly exceed 30 round per minute on average, even if exceptional feats of higher rate of fire are recorded.

Though the rifle was the standard issue weapon of the turn-of-the-century soldier, on the battlefields of WWI a weapon reigned, causing mayhem and filling men with dread: the machinegun. A wonder of then modern mechanical technology, it was capable of fully automatic fire with ROFs of 500 - 800 rpm and on the open ground of no man’s land could tear a company of infantrymen to pieces in a matter of seconds. But it was far more cumbersome than the bolt action rifle and, not much differently from artillery, could be operated only from semi-fixed positions.

Enters the submachinegun: a weapon designed with full auto fire in mind, like a machinegun, but using pistol cartridges, rather than rifle ammunition, allowing for a much lighter build, faster rate of fire (some early SMGs easily exceeded 1000 rpm) and, above all, making the weapon truly portable and, in most cases, even far more compact than the bolt action rifle, so that by the second decade of the XX century SMGs had become extremely popular with armies, police forces and criminals all over the world. The main drawback of the SMG was the same factor that made it possible: the cartridge it fired.

Pistol cartridges had poor range, even in the longer barrel of these guns, and poor wounding power when compared with the devastating effects of rifle bullets. The hail of gunfire they were capable of made up for the latter problem at close range but, as distance increased, the spread of the shots made hits quite improbable. 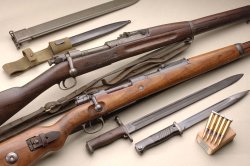 Battlefield analysis conducted after WWI and after the first phases of WWII helped pinpoint two important facts: first and foremost, that most combat action took place within 300 meters, far below the 1000 meters range the rifle was capable of; moreover, with the limited training war time realistically allowed for, troops were very unlikely to hit anything beyond 500 meters anyway.

This initially caused most armies to abandon the long rifle in favor of the more compact carbine design. It was indeed lighter, easier to handle, but it was not enough. Lighter rifles had harsher recoil and their cartridges had far more power than was realistically needed.

The conclusion was that an operative gap existed between the quick firing machinegun with its weak pistol cartridges and the powerful bolt action rifle with its slow rate of fire. 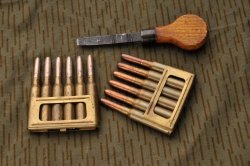 The italian 6,5 mm Carcano is one of the first attempt for an intermediate cartridge

Machineguns had made a strong point in demonstrating the usefulness of suppressive fire during combat, that is a hail of fire so intense as to practically immobilize the enemy into his positions making maneuvering impossible. Because of this, full auto capability at medium range while maintaining mobility was considered very useful by the most progressive armies of the period (while others still dwelled on the concept of ammo economy, well obsolete by those times but still loved by the bean counters).

The solution was to create a cartridge which was half way between rifle and pistol, trying to get the best of both worlds: full auto capability in a portable, compact gun capable of suppressive fire like a submachinegun but also of engaging targets at rifle ranges up to a realistic battlefield limit of 300 meters.

The first to acknowledge the usefulness of such a cartridge were the Germans, which developed the 7.92x33 Kurz (“short” in german) by reducing the 7.92 Mauser and chambered it in the StG 44 selective fire rifle. StG stands for SturmGewehr, a term insisted upon by Hitler himself, who considered the proposed term “Machinenpistole”, Automatic Pistol,  not aggressive enough. The Assault Rifle was born (Assault Rifle being nothing more than the translation of the german term). 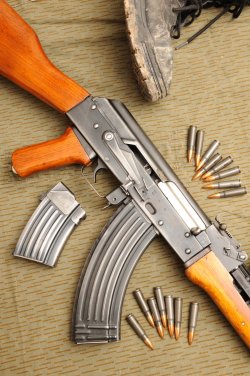 The russians, with their pragmatic approach to warfare, followed suit with the 7,62x39, even if they didn’t develop a true assault rifle until three years after the germans, with the Ak-47, which will remain the epitome of this kind of weapon up to our days.

Other westerner armies initially shirked away from the concept, or embraced it only partially. It was the case of the 7,62x51 NATO, intended as an “intermediate” cartridge obtained by shortening the venerable 30-06, but for all practical purposes still a full rifle cartridge. 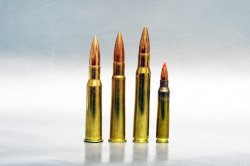 The FN FAL, the M14, the H&K G3, the Beretta BM-59 were still quite heavy, cumbersome and of very limited usefulness in full auto mode, due to recoil.

It won’t be until the late ‘60s that the USA will not only fully embrace the concept of intermediate cartridge, but will bring it a step forward, further reducing caliber and power with the 5.56 NATO cartridge. This apparently diminutive round and the rifle that was designed to fire it, the M-16, went to redefine the concept of assault rifle and made it became finally world-wide adopted, causing even the russians develop their own version, the 5.45x39 cartridge (actually, the 5,56 won’t be officially adopted by NATO until 1977, so the 5,45, adopted by the Warsaw Pact in 1974, can be considererd more or less born at the same time). 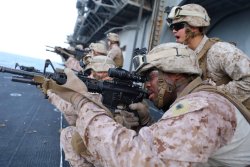 The 5.56 NATO allowed the soldier to carry more ammo for the same weight, was cheaper than both the 7,62 NATO and 7,62x39, had flatter ballistics and such low recoil that aimed automatic fire was possible (at short range).

As of today, still a lot of debate remains on the virtues and flaws of the intermediate cartridge, between those who think the 5.56 is the best thing after sliced bread and the supporters of the 7,62x51 of old, a debate that has caused the birth of new intermediate cartridges whose purpose is to correct the diminutive 5.56 shortcomings while not losing its many advantages. Surprisingly (or, perhaps, not that much after all) many have much in common with the 7,62x39 and the 7.92x33 that started it all…

Subscribe to the Newsletter
This article is also available in this language:
DE
Click here for more information on the topics:
TechnicsAmmunitionHistorical Firearms
That might interest you too: