Ralf Vanicek is among the most successful shooters in the PPC-1500 class. Now the product manager for handgun ammunition in the House of RUAG gives VISIER a glimpse behind the scenes 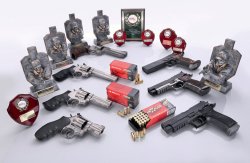 ‘Tools of the trade’ and success stories: trophies from the most recent European Championship 1500 and Ralf Vanicek’s PPC 1500 guns

The signal sounds. What follows is a procedure that by now he lives and breathes. Draw the weapon, assume firing position, fire, holster the weapon, relax. His entire concentration is focussed on one point – some call it tunnel vision. But here’s how he describes it: “Everything takes place in your mind. The results get better as I relax and enjoy my shooting more. About an hour before the competition I sit down and mentally prepare myself for everything that is going to happen. I check my weapon and the ammunition, even before setting off. To do this I put each cartridge into a barrel gauge; the ones that don’t fit are rejected. I also check the primers. But that’s pretty much it,” explains Ralf Vanicek, one of the most successful pistol shooters, giving us an idea of how he prepares for competitions in the handgun discipline PPC 1500. 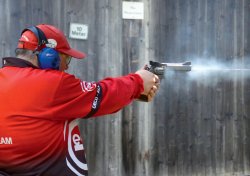 Axel Manthei
One moment in time: Vanicek at the 2014 German Championship in Alsfeld, Hesse, taking part in the main competition, revolver division

Here he amasses titles like other people collect stamps. This year alone he came home with five titles from the European Championships in Norway – although there were 25 High Masters in the starting line-up. Vanicek also claimed three top spots at the German Championships held in the Hesse region of Alsfeld from 19 to 22 June. His total haul:  first three times, second twice and third once in the High Master category. He benefits in sport from his position right at the source as product manager for GECO pistol and revolver ammunition, which allowed him to use the new 9 mm Lugar precision cartridge (GECO 9 mm Hexagon) during the competition way up in the north of Germany. His successes speak for themselves.

Vanicek’s career started relatively late. Born 1970, he did not join the shooting club in Wernsdorf (by Berlin) until 1992, where initially he shot small calibre pistols before progressing to the large calibre weapons two years later. “I was always interested in shooting. It was never a specific discipline or a certain weapon that grabbed me. It was always shooting itself. So at the start I wasn’t really sure what to shoot. Basically I took the classic route.” 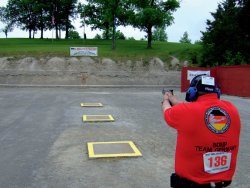 Vanicek at the Bianchi Cup in the US state of Missouri, shooting at the mover from the furthest position (25 yards)

Vanicek finally settled on the discipline PPC 1500 in 1997. Since then, the ‘sportingly attired manager’ has been a permanent fixture on the scene. It goes without saying that he is responsible for the highest number of rings ever recorded with a WA 1500 revolver in a main match (world organisation PPC 1500) – 1497 rings, registered on 16 August 2009. And he also scored this year’s WA 1500 top mark in a main match in the revolver class – 1495 rings.

But his success is not limited to the PPC 1500 division. Over the years he has collected well over 50 German championship titles across a variety of disciplines such as in the German Shooting Federation (DSB) service pistol class, the German Shooting Sport Federation (BDS) precision disciplines or PP1, PP2, NPA, Super Magnum and the EPP by the Federation of German Military and Police Shooters (BDMP). Added to this are over 30 European Championships in PPC 1500 and Bianchi Cup, also 47 world championships in the same disciplines, with most of them brought home in the various PPC 1500 competitions. His collection of titles is unparalleled. His professional life is equally focused on shooting, which doubtless comes as an advantage.

“I joined GECO in 2011. Since then I have worked as product manager, responsible for handgun ammunition. It’s fair to say that the job lets me put the experience I have from the world of sport to good use. It also allows me to test new products in a competitive environment – for instance the GECO 9 mm Hexagon in Norway – so I can fine tune the design when necessary.”

Faced with this accumulation of titles, it is almost inevitable that the question will arise as to just how hungry Vanicek remains and whether he is still able to find sufficient motivation to continue competing. That isn’t an aspect of particular concern to the shooter Ralf Vanicek: “I really don’t have any trouble finding motivation, making sure I keep enjoying the sport. One method I have is to give myself a winter break – and you can certainly tell when it comes to the initial results. But I do really enjoy my sport once things get going again. And it’s certainly a motivation to keep setting new records.”

To do this, he quite frequently uses ‘off-the-peg weapons’ that are tuned for the respective discipline. But things weren’t always this way: “My first gun was a Bernadelli Practical V.B. I bought it at the time for 2000 Deutschmark; but quite soon it didn’t give me what I was looking for”, says Vanicek, looking back at his early days of shooting at the end of the 1990s. It didn’t take long before sport accounted for a large part of his life. Nevertheless, the qualified chef from the east of Berlin went back to school and completed a degree course in business studies. And since then he’s been seen out and about in two outfits: his sports gear for competitions and this business attire for representative tasks, initially for SIG Sauer and now for RUAG.

“The job I have – suited and booted – is one I really enjoy. I like them both, especially since travelling aboard lets me get to know a variety of different cultures, also the way they shoot”. 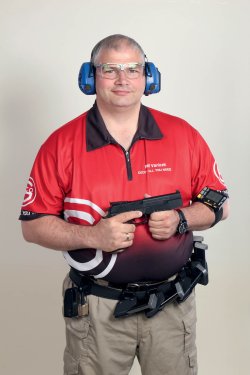 Kitted out: here’s what Vanicek looks like in his competition dress, including the mandatory safety equipment

For instance this year in Oslo. His five titles made him the most successful shooter in the entire event, scoring 597 and 36 X (inner ten) of a 600 maximum – one of the best results of recent years – to bring home the title in the Distinguished Pistol discipline. In doing so he scratched at the current record held by Thomas Klix (597 and 41 X), which has stood since 2005.

“I can’t really say I have a favourite discipline in PPC 1500. I put more training into the main competition in pistol revolver, and tend to do the other things more on the side.

I try to train twice a week in the run-up to competitions.

I don’t even have a favourite weapon. Although all my revolvers are based on S&W 686 and my pistols are SIG Sauer P226 X-Five or X-Six.”

And even aged 40, Vanicek has no plans to retire. “I’d like to keep my hobby going for a few years yet. It’s also important for me to help develop the Hexagon brand, to see it expand, and use my experience in its best possible interests. One of the benefits of my hobby is that you can continue shooting at a high level, no matter how old you are”.

But Vanicek does see dark clouds on the horizon, ones that are all too familiar in other shooting disciplines: there is a dearth of young talent. “Shooting simply doesn’t have the mass appeal of football. There are a few well-known shooters in Europe, but on a global stage they are unknown. Shooting isn’t a crowd puller. And the next problem comes when you look at the increasingly tight obstacles placed in the path of anyone looking to take it up as a hobby. It’s much easier with other sports. Also, the equipment is extremely expensive. Simply buying ammunition can become so costly that younger shooters need support. But there’s hardly anywhere to turn if they can’t get help in their immediate families. So now the average age in PPC 1500 is over 40. And it’s not coming down”.

Little cause for concern

But anyone interested should not be put off by these obstacles. After all, it’s the attitude towards shooting that counts, not the financial resources. Vanicek believes that people who enjoy shooting should simply take the plunge:

“At the start it’s important not to think too much about the equipment. Just give it a go. There’s plenty of time to get serious if you realise you enjoy it. And here’s a little tip, just as an aside: In competitions, it doesn’t come down to talent or training: it’s a question of mental strength. Try and keep your expectations modest when entering a competition, for instance to equal good results achieved in training. I never train the competition sequence; I go through the individual sets, but do not calculate the overall score. Sometimes I shoot more sets, sometimes fewer, just to internalise my own sequences. And then the good results come automatically”. 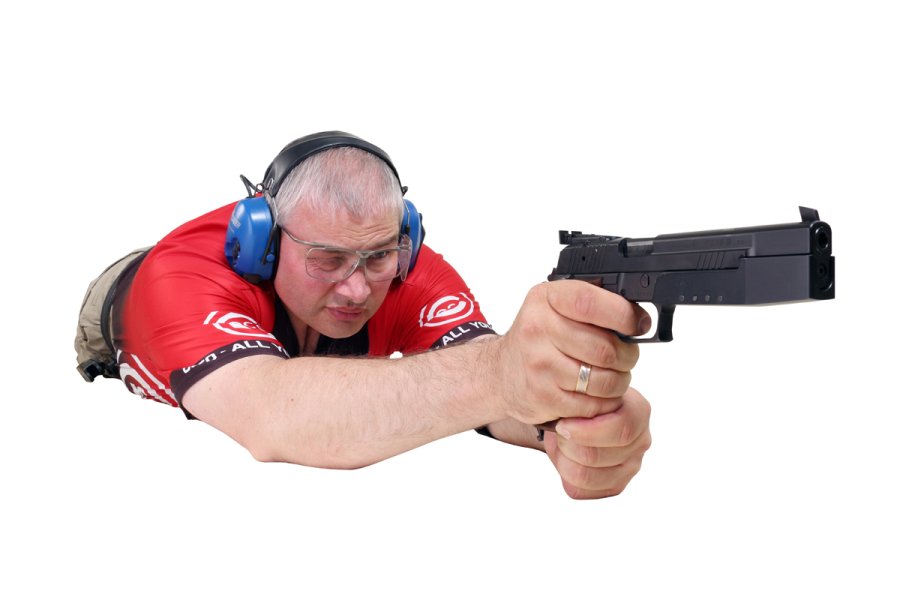 GECO at the IPSC European Championship in Portugal 2013