The 8x57 JS is probably the greatest centerfire rifle cartridge of all times, and the only one that could rightfully bear the title of "mother of all modern hunting calibers"

The 8x57 JS (the correct denomination would be IS, where I stands for "Infanterie", or Infantry, and S stands for "Spitz Geschoss", or “Pointed-tip bullet”) is a true milestone in firearms and ammunition technology and history.

Its set of ballistic features shaped history and literally laid the foundations for the development of a wide array of following calibers, including the .30-06 Springfield and the Italian 6,5mm Carcano round. The 8x57mm JS caliber was conceived for military purposes, and back then, it was immediately recognized as an extremely innovative achievement.

The 8x57 JS caliber was one of the first rounds to use a nitrocellulose-based propellant − the first one ever being the French 8mm Lebel cartridge; unlike its predecessor, though, the 8x57 JS cartridge sported an extremely modern, rimless design (while most previous centerfire military cartridges were rimmed) that speeded up and improved feeding in the guns it was conceived to be fired from. 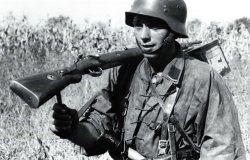 From the archives of all4shooters.com
A German soldier in 1943, armed with a Mauser Karabiner 98K bolt-action rifle chambered for the 7,92x57mm cartridge − currently known as the "8x57IS" as per CIP designation

Also known as the "8mm Mauser" round, the 8x57 JS cartridge as we know it today is a vastly improved variant of the 8x57 I caliber developed in 1888 by the German GPK ("Gewehr-Prüfungs-Kommission", or "Rifle proofing commission") for its Gewehr model 1888 rifle, also known as the "Kommissionsgewehr".

From the archives of all4shooters.com
14,5 million Karabiner 98K bolt-action service rifles were built before, during and after World War II by several factories in Germany and abroad

Said predecessor was loaded with a smaller (8.07mm in diameter), lighter (14.6 grams), round tip bullet; those parameters were modified in 1905 by boosting the caliber to the current 8,2 mm and by passing to a pointed-tip, 10-grams bullet; further improvements were made in 1934, with the overall weight of the bullet being boosted to 12,8 grams.

The 8x57mm round proved itself capable of providing impressive performance for the time it was conceived, developing muzzle velocity levels in excess of 880 metres-per-second and a power factor close to the 400 kilograms-meter threshold (approximately 3923 Joules). 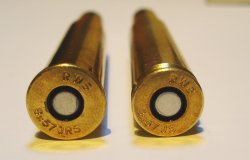 all4shooters.com
A 8x57mm JS RWS H-Mantel round, loaded with a 187-grain bullet

The 8x57 JS round established itself as the German Armed Forces' standard service caliber, and was used in both world wars on famous guns such as the Mauser K98 bolt-action service rifles and the Mg34 and Mg42 general-purposes machine guns. It was adopted by other Countries around the same time, including China, Egypt and Turkey. 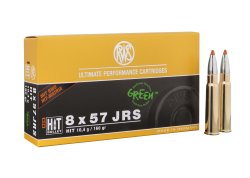 RUAG Ammotec GmbH
The high popularity of the 8x57 JS caliber between hunters worldwide led many manufacturers to launch lead-free loads, such as the RWS JRS Rimmed variant loaded with a 160-grains HIT bullet

Today, most ammunition manufacturers offer the 8x57 JS in several loads; the average ball weight ranges between 180 and 200 grains (approximately 11,6 to 13 grams). The average muzzle velocity with 170-grains balls ranges around 800 metres-per-second; the relevant energy levels reach the 370 kilograms-meter threshold − a performance level that fully classifies the 8x57 JS round as a "mid-intensity" cartridge, similarly to .30-06 Springfield, 7,62x51mm/.308 Winchester, and many other popular hunting and sport shooting calibers. 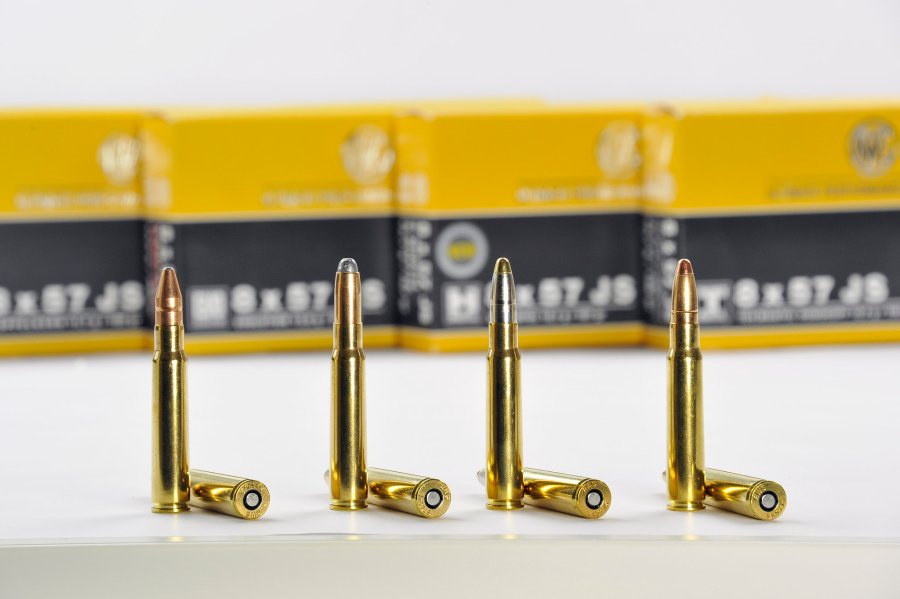 RWS is the ammunition manufacturer that offers the largest and most complete range of loads for this traditional hunting cartridge.

Immediately after World War II, impressive quantities of 8x57 JS ammunition found their way to the U.S. civilian market; it didn't take long to gun-wise Americans to appreciate the inherent hunting potential of this caliber, and to demonstrate how it could fare perfectly well outside of the battlefields and in the hunting fields, particularly on mid-sized and large-sized ungulates − thus confirming the earlier hunting impressions gathered by those who pioneeringly hunted African big game with 8x57mm caliber rifles in the German colonies of Tanganika, Namibia, Cameroon, and Togo.

As a further addition of the present-day lineage of the 8x57 JS caliber as a prominently hunting-oriented cartridge, a rimmed version of this round exists − dubbed the 8x57 JRS − that was specifically conceived to be used on break-barrel hunting guns such as express rifles, combination guns, and Kipplauf designs.

Despite being still very popular in Germany and Austria, the 8x57 JS round is currently somewhat forsaken by most hunters, who would rather use quintessentially American calibers such as the .30-06 Springfield or the 7,62x51mm/.308 Winchester not because they're necessarily superior to the 8mm Mauser round but because they're easier and cheaper to find, both as loaded rounds and as reloading components. However, well 100 years after its introduction, the 8x57 JS cartridge still is a great choice for hunting mid-sized game, and all in all, it remains an effective, well-balanced load that carries on its historic heritage with pride.

Owners of 8x57 I caliber rifles should NOT try to use 8x57 JS ammunition on them, as this last round sports a wider bullet diameter if compared to the earlier.

Concerning the confusion between the J and I suffixes, with "JS" taking the place of the more correct "IS", apparently that may have been due to the original manufacturing plant for this round using a defective puncher that would mark the cases with a distorted I which looked much like a J.

Despite having been conceived to be used in Mauser service rifles, the legendary German gun designer Paul Mauser had no part in engineering this cartridge, which should be considered as a brainchild of the GPK ("Gewehr-Prüfungs-Kommission").

Some examples of reloading specs for the 8x57 JS caliber

Subscribe to the Newsletter
This article is also available in this language:
DEIT
Click here for more information on the topics:
Ammunition8x57IS8x57 JRSBolt-action riflesCombination rifleHuntingHunting RiflesSport ShootingUngulateWild boar
That might interest you too: