Golden ager is certainly a term that applies to the 20th century’s most important rifle cartridge – the 7.62x51 mm NATO also known as .308 Winchester for the civilian market

The state-owned MKEK Group from Turkey recently presented its Milli Piyade Tüfegi (MPT)-76, in English: “National military rifle”. The calibre was the biggest surprise of all: 7.62x51 mm. 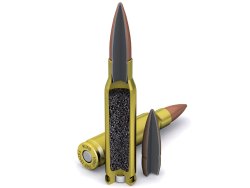 In this, the Turkish NATO partner declined to follow in the footsteps of its transatlantic alliance partners: the always controversial switch to a smaller, lighter, faster cartridge with lighter recoil. The United States had already attempted this during the Vietnam War in the 1960s, equipping their GIs with an M-16 in .223 calibre M193. It took NATO until 1980 to standardise this calibre in the metric system as 5.56x45 mm – in the form of the Belgian-made cartridge SS 109.

The following years saw a large number of armed forces switching to this calibre. But the 7.62x51 mm never disappeared entirely from the arsenals, and naturally this applies just as much to the weapons that use this type of cartridge – the first large calibre that NATO had ever accepted as a joint standard over 60 years ago.

Assuming the armed forces did say goodbye to this weaponry, it had a tendency to be stockpiled in depots or to find alternative uses mounted on vehicles. Its role as a ‘crew served weapon’ – requiring operation by a small team – presented another alternative use.

Born in the USA

It isn’t much of a surprise that the NATO forces showed greater willingness to part ways with 7.62x51 mm ordnance in assault rifles and more reluctance to follow suit in machine guns. The calibre hadn’t been universally accepted when the NATO armed forces started using it 60 years ago, and NATO standardization in December 1953 was mainly due to pressure exerted by the United States. 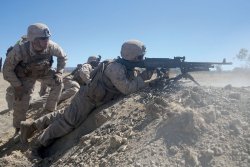 Corporal Max Bree
US Marines in the field have fitted their MG M 240 B in 7.62x51 mm to a gun tripod

This cartridge is a son of the post-war era. It was around this time that the Americans, Soviets and Germans realised that the standard ammunition they had used so far was too long and overly powerful for standard deployment.

This is not exactly surprising: Cartridges such as the German 8x57 mm, the Russian 7.62x54 R and the American .30-06 Springfield all came from a period extending from the mid-1880s to the run-up to the First World War.

This epoch saw the rise of the bolt-action repeaters and the new cartridges they brought, which the ballistic technicians loaded with innovative low-smoke powder and for which they dreamt up modern bullet forms.

This advanced weaponry threw open the doors to new standards of accuracy, efficacy and range, which just a few decades beforehand would have been considered impossible with the guns issued to normal foot soldiers. But by the Second World War at the latest, it had already become apparent that the circumstances most usually encountered on missions and in firefights did not call for these heavy-duty specifications.

Military strategists in the United States turned once more to smaller cartridges, determined to make them accurate and effective over comparatively long distances. The Frankford Arsenal launched a series of tests with shortened jackets as far back as 1944. By the end of the decade, a jacket length of 51 mm had become the generally accepted ideal size for the planned new army cartridges. But it was not this calibre, and instead the .300 Savage, that served as the starting point for this project, which initially went by the name T65.

Then Winchester Ammunition got involved, introducing a civilian version of this cartridge in 1952 and putting it on general sale under the name .308 Winchester. And this is what led to the introduction of NATO’s standardised large cartridge 7.62x51 mm at the start of 1954. Its parameters included a bullet weighing 145 to 147 grains with an initial velocity of 835 to 840 metres per second. For decades, US army snipers used a 173-grain load by Lake City Arsenal, featuring a heavy boat-tail bullet known as the M 118. Right from the start, this universally versatile calibre proved extraordinarily successful on the civilian market, where it was used for sport and hunting, prompting its release with alternative projectiles than those used as standards on military cartridges.

In Europe, however, the new standard calibre was considered a less than ideal solution for assault rifles. Here there was a preference for equipping this kind of weaponry with so-called medium calibres that in terms of performance and size ranged somewhere between ammunition used in pistols and in repeater rifles. The British, for instance, were keen to switch to calibre .280 British (7x43 mm).

In contrast, the Germans considered equipping their future armed forces with a newly created assault rifle StG 44 in 7.92x33 mm. In early days, this had been the preferred choice for the FN FAL (but which was released later on as a series weapon in 7.62x51).

It is interesting to note that current discussions within NATO concerning a suitable calibre have returned once more to these medium ranges. But it is equally important to remember: Although it was not exactly welcomed with open arms, the 7.62 calibre – once established – stuck around in European military circles for longer than it did in the United States. This does not apply only to the German military, which took until the mid-1990s to complete the switch from the 7.62 G3 assault rifle to the 5.56 G 36 model.

The calibre controversy as a catalyst

Experience of firefights in Afghanistan prompted current debates, and without any doubt has kick-started the large-scale return to 7.62x51 mm ammunition.

After all, the battlefield in the Hindukush is characterised by long ranges on the one hand and by buildings frequently made of thick clay walls on the other. In both of these instances, the 5.56x45 mm is clearly inferior.

So a large number of NATO states initiated plans to bring back older weapons from their depots and to organise their reissue as standard equipment.

This is indeed what happened, for instance in the British or Australian armed forces which increasingly started carrying the ‘Gimpy’ – the royal nickname for the General Purpose Machine Gun FN MAG – on a platoon level in place of the FN Minimi 556.

The German armed forces were particularly keen to acquire the 7.62 assault rifle G3.

After all, the MG 3 is still used as an all-purpose machine gun, and the venerable G3 itself had gradually become, almost on its own initiative, a Designated Marksman Rifle (DMR), fitted with a scope.

Strictly speaking, the G 28 – based on the civilian semiautomatic Heckler & Koch MR 308 and equipped with the high-quality Schmidt & Bender scope 5-25x56 PMII – bequeathed the German armed forces a semiautomatic sniper system. Numerous other countries prefer the lighter HK 417 in the DMR role. This weapon is used in the German special forces as the heavy assault rifle G 27. A shorter version – going by the name G 27k – is currently in the design phase. 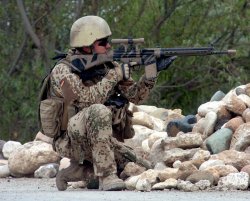 This German army paratrooper has stuck camouflaged tape to his G3 in 7.62x51 mm, ready for deployment to Afghanistan. The old Hesoldt sights are fitted to the quick-release mount 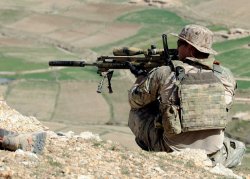 Petty Officer 2nd Class Jacob Di
US special forces use a precision rifle version of the FN SCAR-H in 7.62x51 mm as the Mk-20 Sniper Support Rifle. It is easily recognisable owing to its longer receiver and barrel

The debate concerning the right calibre spread to a substantial number of other weapon procurements, too.

For instance, responding to experience from the field in Afghanistan, US Special Operations Command (USSOCOM or SOCOM) halted procurement of the 5.56 variation FN SCAR-L (Mk-16) in favour of the FN SCAR-H (Mk-17) in 7.62 and the Mk-20 sniper model known as the Sniper Support Rifle.

Across the board, the notorious ‘asymmetric warfare’ has shown one thing to be true: the age in which one calibre would fit all, is over.

Now the armed forces from the West are deploying larger numbers of surgical battlefield forces.

And it is becoming increasingly apparent that under certain circumstances it may be sensible to stockpile weaponry that these troops may need in any given situation.

But the principle of simplification has not disappeared entirely, although now it comes in the form of hybrid systems: Colt, for instance, is adapting its LE 901-16S model in such a way that it only takes a few steps to switch from calibre 7.62 x 51 mm to 5.56 x 45 mm and back again.

Although NATO will not return entirely to 7.62, this calibre will remain an integral part of the Atlantic arsenal. Golden agers are necessary for civilian and military purposes in equal measure.

Naturally, the return to 7.62 weapon on the lower tactical levels goes hand-in-hand with larger orders for matching ammunition. Almost all ammunition manufacturers are selling improved loads in this calibre. They include FN Herstal from Belgium, which offers the SS 77/1 Full Metal Jacket (Ball) or the P80/1 Armour Piercing. Nammo is currently developing a Ball 11 Long Range and the tailored product Ball 11 Armour Piercing. MEN recently received approval from the German Armed Forces for a DM 151 Armour Piercing.

Subscribe to the Newsletter
This article is also available in this language:
DE
Click here for more information on the topics:
7,62 mm NATO.308 WinchesterAmmunition