The well over 140-years-old .45-70 Government caliber is still today a very popular choice between hunters and sport shooters: a very effective round, it is offered by many manufacturers from all around the globe

Have you ever seen a classic Western movie − one of those old-style flicks with the U.S. Cavalry besieged by Indian tribes, soldiers taking cover behind rocks or in a dry creek in the Monument Valley, and shots being fired from, and in, every direction?

The .45-70 Government caliber was adopted in 1873 as the standard service cartridge for the United States Army as a replacement for the .50-70 Government metallic case blackpowder cartridge which felt long in the tooth despite having been adopted only in 1866. 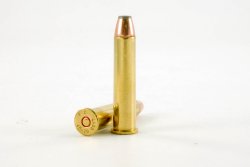 From the archives of all4shooters.com
A .45-70 Government cartridge as offered by Federal Premium, loaded with a 300-grains SP ball

The original loads for this caliber were based on a .45-caliber 500-grains ball propelled by 70 grains of black powder − hence the .45-70 denomination, with the "Government" designation identifying it as a service cartridge. A following variant, specifically conceived for cavalry carbines, used a 405-grains bullet and a 55-grains load of black powder.

As the years went by, new smokeless propellants were developed and new tendencies were established in the field of ammunitions for individual firearms − more specifically following the German researches and developments. The U.S. Government thus phased the .45-70 caliber out of service in favour of the more modern .30-40 Krag round, and sold the existing stocks on foreign civilian markets.

Initially, the .45-70 Government caliber suffered a sharp market decline; after it was painlessly transitioned from black powder loads to smokeless loads, it regained a wide pool of appraising enthusiasts between shooters and hunters. In modern times, these were joined by antique guns and CAS/OWSS enthusiasts.

Its huge, stocky bullets − generally hollow-point in design, often nicknamed the "Flying ashtrays" − still offer power levels ranging around 350 kilograms/meters (well over 3400 Joules or 2500 foot-pounds), and even exceeding it, making the .45-70 Government caliber a more than viable alternative for hunting purposes.

Hunters and sport shooters quickly realized that this round could provide an unexpected level of accuracy on paper target and on running game alike, as well as an impressive stopping power − enough to stop even the largest prey dead on its track if fired from close quarters, hence why it is still anything but on its way to retirement.

The trajectory of the .45-70 Governement cartridge shows a well-pronounced drop curve, which makes it viable for hunting purposes only on short ranges; it has indeed gained acceptance in long-range shooting sports, although in those cases, terminal energies will generally turn out to be much lower than one would expect from such a large caliber.

Its primary use on hunting is on battue and driven hunt, deep in the woods, when the game will almost always appear at short range; the .45-70 Government cartridge is generally chambered on modern, very handy and quick-to-use lever-action carbines, which will provide fast follow-up shot capabilities. A niche of hunters will also be found to be partial for single-shot breechloading rifles chambered in this cartridge, using it for mid-to-long-range shooting on ungulates and other mid-sized game which won't be too much ravaged from the impact of such a big and heavy bullet. 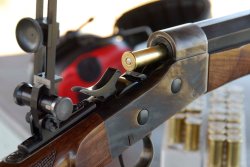 On short distances, the .45-70 cartridge can also be considered a valid solution against bears and other very large preys, particularly in north America (Canada and the United States), where it has indeed been experimented and used for years.

There is not much use for it in European hunting, exception made maybe for driven boar hunt in Italy and other southern European Countries or for larger game hunt in the vast woods of the northern parts of the Continent.

Almost all firearms currently available on the market and chambered for this old caliber are lever-action rifles and carbines, but some express and single-shot designs are also available.

Commercial, loaded ammunition are also plentifully available, although they lack diversifications in terms of specific loads... but hey, that's what reloading is for!

Those who may want to load their own .45-70 Government ammunition should also be aware of pressure levels, depending from the type, age and overall conditions of the guns they're meant to be fired through. More specifically, some "old glories" may sport a weak action − too weak for modern loads. Guns that were conceived to fire blackpowder ammunition may not be structurally solid enough to endure the pressure levels of modern hot loads. 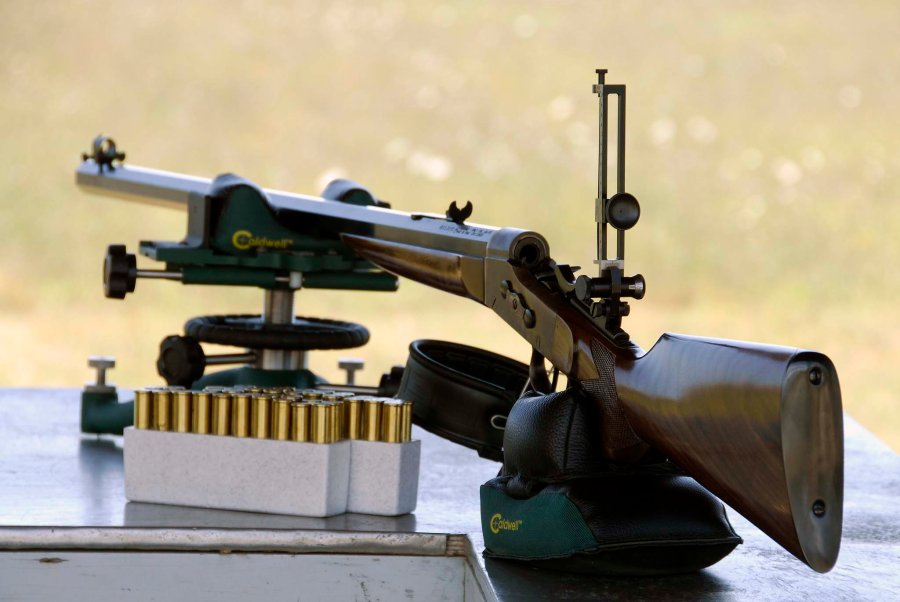 Some historians trace the roots of the .45-70 Government caliber to a modified .50-90 Sharps caliber case.

All throughout its service history, some lots of .45-70 Government ammunition were built using a wooden bullet filled with hunting lead pellets, which allowed soldiers to hunt small game for provisioning when on the field.

Some examples of reloading specs for the .45-70 Government caliber

Subscribe to the Newsletter
This article is also available in this language:
DEIT
Click here for more information on the topics:
Ammunition.45-70 GovernmentHuntingHunting RiflesLever Action RiflesReplicasSport ShootingUngulateWild boar
That might interest you too: