A day at the range with Olympic champion Gabriele Rossetti, winner of the gold medal in the Skeet category, to find out more about one of the winning accessories used by the shooter, the SHOTHUNT PBS earplugs.

Great results are never achieved merely by chance, but only after notable dedication, constant commitment and meticulous attention to detail; these are essential elements in a sport like skeet shooting where both physical and psychological factors are involved.

We spent a pleasant day at the Pieve a Nievole firing range, with the Olympic champion Gabriele Rossetti, who recently won a gold medal in the skeet shooting category at the Rio 2016 Olympics.

All4shooters wanted to participate in a training session to show our readers what sort of effort many sportsmen and women put into their daily training to make Italy second to none in the clay shooting world, and discover what sort of winning techniques and choices help make our champions reach the top. 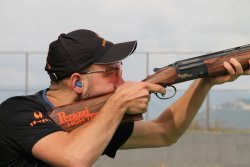 During the training session, Gabriele shows us how the SHOTHUNT PBS earplugs help him enhance his concentration, without having to wear big ear muffs.

These are a fundamental accessory for a shooter as ear muffs protect your hearing when shooting round after round and let you isolate yourself from ambient noise to concentrate on the skeet.

In this case, Gabriele Rossetti shows us why he chose SHOTHUNT PBS earplugs, specifically designed for sport shooters by EURO SONIT and becoming more and more popular with sportsmen and women by the day. 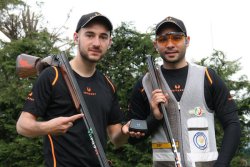 Many shooters and champions have chosen to use SHOTHUNT, and in this intense afternoon on the firing range, Gabriele Rossetti and Anthony Terras, the French Skeet Olympic medal winner, took turns on the platform.

Unlike the rest of the range, the SHOTHUNT PBS earplugs are blue and help shooters concentrate on the platform during training sessions and trials, shooting in complete comfort without anything getting in the way.

The extremely compact design packs a lot into one centimeter and one gram, and shooters wearing the earplugs will simply forget they have them in as they’re so unobtrusive.

Using SHOTHUNT PBS earplugs, shooters can talk to each other and to their trainers while resting during their training sessions, and remain in touch with the external environment, yet at the same time they’re protected from the potentially harmful noise levels at the firing range.

This model in fact instantly and automatically dampens harmful noise, providing guaranteed protection against acoustic trauma from shots and prolonged noise, while faithfully reproducing the natural sound of the environment in high fidelity. Using a simple button, you can select from 3 different audio level programs:

Here you'll find our article about the SHOTHUNT earplugs.

Subscribe to the Newsletter
This article is also available in this language:
DERUIT
Click here for more information on the topics:
SHOTHUNTAccessoriesSport ShootingTechnics
That might interest you too: 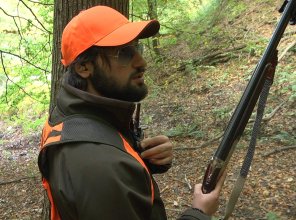 We tested the SHOTHUNT Wireless earplugs on a driven boar hunt: for protection, two-way communication and listening all in one. 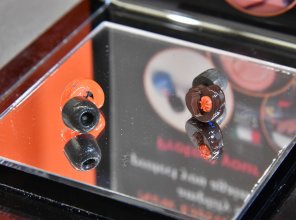 shothunt03/15/2017SHOTHUNT earplugs; enhance and protect your hearing on the hunt or shooting platform

IWA 2017 / New from SHOTHUNT. There are three different models in the SHOTHUNT earplug line. These new electronic hearing protectors increase the perception of sound while protecting hunters’ and shooters’ hearing from the potentially harmful noise of shots fired.