The Pedersoli catalogue includes many breech‑loading guns, and we will be taking a closer look at the elegant Opera .410 side-by-side, a sophisticated gun designed for sport hunting

Pedersoli is synonymous with replica muzzle-loaded guns of historical interest, but as we have said many times before, there is more to Pedersoli than that. Today we would like to give you a close-up look at a gun that meets the requirements of a growing number of hunters interested in smaller bores, giving them the chance to experience a more thrilling type of hunting, enthralling and gratifying from both a practical and aesthetic point of view.

The Pedersoli Opera Carmen double-barrelled shotgun is made by Pedersoli for those who see a shotgun as more than just a weapon they can use to feed their passion, but also as the expression of fine art reminiscent of the operas this series of shotguns is named after. 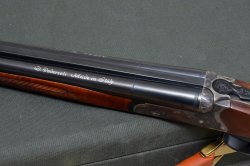 The floral engraving adds an exquisite touch to the tortoiseshell finish action, trigger guard and unlocking lever on the Pedersoli double. The name of the Opera Carmen is engraved along the first barrel, with the name of the gunsmith on the second 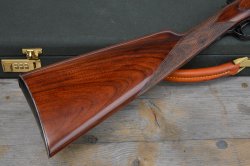 Select walnut on the Pedersoli Opera, an English stock with fine chequering for excellent grip 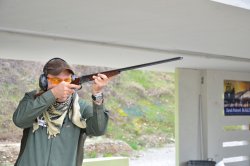 Testing the Pedersoli Opera double, we found it fast and instinctive to aim, it was very stable and recoil was quite soft when firing one barrel after the other

The gun we tested, the Opera Carmen, is a .410 double, comprising the fine mechanism and materials we have come to expect from Pedersoli guns.

The repeater system is Anson & Deeley, the barrels are milled from solid block and the fine walnut is oil finished.

The tortoiseshell finish action is finely engraved with floral motifs, as is the trigger guard and unlocking lever. The underside of the action is engraved with the proud protagonist of Georges Bizet's opera, the gypsy Carmen standing proudly in her traditional dress.

The Prince of Wales grip gives the gun a harmonious line and makes it easy to aim, while the beavertail forend gives you a firm, comfortable and trustworthy grip.

This gun has two triggers but there is also a single trigger version. The wide trigger guard leaves you enough room for fast and intuitive use.

The barrels on this gun are 71 cm long, but it is also available with 66 cm barrels, making it both versatile and lethal at medium range.

The field of use of this bore has in fact become much broader than in the past.

Once used only for hunting from a hide or stand, today the .410 bore, thanks to modern mechanical design and high-performance ammunition, is widely used also for walked-up game shooting, especially with pointers at medium ranges from 15 to 30 metres.

After shooting the gun for pure fun on the firing range, the Pedersoli Opera double proved to be extremely stable and precise, barrel after barrel.

The pleasant sensation of the fast and agile aiming confirms one of the advantages of the .410 bore also on this double, not to mention the fact that the recoil is all but unnoticeable.

Subscribe to the Newsletter
This article is also available in this language:
DEIT
Click here for more information on the topics:
Pedersoli Davide.410 (gauge) HuntingShotguns
That might interest you too: