IWA 2018 / New from Voere: S16 & K15A rifles. The Austrian manufacturer of precision and hunting rifles showcases the new S16 bolt-action rifle and its “small brother”, the K15A match-grade rimfire model. A unique version with integrated suppressor was presented as well.

The Austrian manufacturer Voere Präzisionstechnik GmbH is well-known for its precision and sniper rifles, among them the renown VOERE X3 or LBW-M. 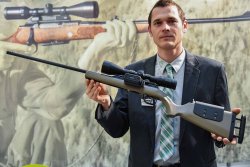 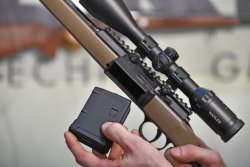 "Innovation in Carbon“ is the motto of Voere's new S16 bolt action rifle. It is based on the K15A rimfire rifle that could be seen at the Nuremberg fair as well. The S16 in chambered in .223 Rem and weighs in at just below 4.4 lbs / 2 kg. To improve handling in prone position, the magazine is mounted sideways in the receiver. Shooters will be delighted to hear that the S16 accepts any STANAG-compatible (AR-15 type) magazine.

The most important innovation is the carbon fiber reinforced barrel responsible for the low weight of the completed rifle. It is available with an integrated suppressor.

The rifle comes with an adjustable cheek rest and collapsible stock.

In addition to the S16 Voere presented its "small brother“, the K15A, at the IWA in Nürnberg.

The new K15A bolt-action rifle merges quality manufacturing with an affordable price aiming for sport shooters as well as people who love to find an affordable rifle in .22LR for plinking.

Compared to its predecessor, the K15, the K15A simplifies handling by using a cock on opening mechanism. The 19.6 in / 50cm barrel has a steel core surrounded by a 3mm carbon outer shell. It is additionally equipped with a muzzle thread for mounting suppressors or other muzzle devices. Additionally, the K15A can be ordered with an integrated suppressor.

The bolt-action rifle comes with a 10-round magazine with the magazine release just in front of the magwell.

The stock is made from fiber reinforced synthetic material and can be used ambidextrously. It can be adjusted in length and has an integral height adjustable cheek rest. Thus, it can be fitted to almost every shooter. For easy carrying or training, snaplocks are fitted at the side of the stock for mounting a traditional or biathlon sling. Further accessories can be attached using the lower UIT rail for handstops or bipods. Traditional or optical sights can be fitted utilizing the 11mm dovetail rail.

It comes with a 2-stage trigger offering a wide range of adjustability. The integral firing pin safety completes the package.

You will find all news from IWA 2018 at all4shooters.com

Subscribe to the Newsletter
This article is also available in this language:
DE
Click here for more information on the topics:
VoereBolt-action riflesHunting RiflesIWARifles
That might interest you too: 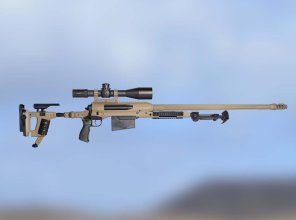 The Voere X4 is a long range shooting rifle available in .300 Norma Magnum, .338 Lapua Magnum, .375 and .408 CheyTac. It is a true concentration of state-of-the-art technical solutions and stands out for its remarkable modularity. Let's see together some of its main features. 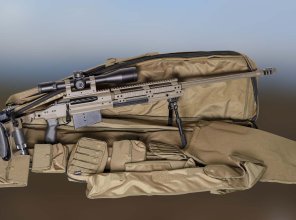 The Austrian company Voere also has in its catalog some rifles designed for long-range and tactical shooting, characterized by great modularity and the ability to adapt to the shooter. The Voere X3 is available as a single-caliber gun or with the possibility to easily change barrel and caliber. 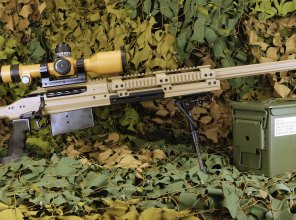 The VOERE X3 was one of the many firearms tested in the new VISIER Special 69. Find out more in the section "Repeaters for the Military" 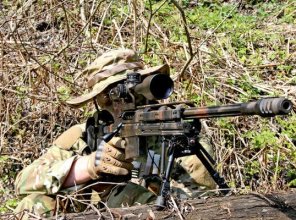