Winter: for some it’s time for hot chocolate. For others, it’s the chamois rutting season. We took up the challenge with new companions, the Swarovski riflescopes. Here is our field test.

In early December the hunting season is drawing to a close and the weather remains variable with a sprinkling of snow enriching the mountain slopes. There’s too much wind for the snow to settle though, and the soft flakes are blown onto our hands as we scope peaks and canyons, inspecting every rock, leaving no stone unturned in our search for our old friend the chamois.

Our story starts in the Dal Balcon (Malo, Vicenza, Italy) armoury when a packet arrives. It contains a wonderful gift. We opened the brown box, curious to see what’s inside, and what a nice surprise it was. 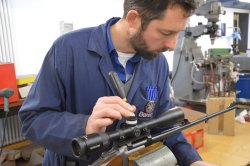 Without wasting a single moment, Davide mounted the Z5 on my kipplauf and calibrated it in the armoury's firing range.

Just three shots were enough to dial the scope in, which can only be explained by a combination of truly exceptional instruments, skill and that professional touch.

We took another three shots the next day just to check if the settings recommended by the Swarovski ballistic program were right. They were spot on. The bullets hit the 200, 250 and 300 metre targets fast and precisely, after turning the turret the right number of clicks. Likewise, the feeling with the rangefinder binoculars and the spotting scope, was great.

The alarm failed to wake us that day, because when it went off, we were already drinking our coffee. It’s the passion for hunting that rouses the spirit and warms the hunter’s soul. And to warm our muscles there was a steep climb to high altitude before dawn, to get there before anything else was up and about.

When we reached the pinnacle, the goal we’d set ourselves almost two hours earlier and about 1,000 metres lower, we shook off the snow that had fallen during the night and gathered on our shoulders, and took in the quite freezing but also quite wonderful view the initially cloudy morning offered us.

In the meantime the first chamois, mostly does and their young, had begun to graze, scraping the snow off the ground, looking for something to eat on the slopes.

There wasn’t a sound, until some rocks rolling down the slope from far above told us the bucks were fighting higher up. So we put our packs back on and started off again.

It wasn’t an easy approach, because on the one hand the uneven slope was partly exposed and there was the risk of being seen by the animals, and on the other it was a vertical drop to the valley floor.

We finally managed to get to within a range of just over 200 metres from the buck we’d singled out and get off a shot, the 85 grain bullet spot on target.

While it may be easy to describe how a scope works, it’s incredibly difficult to describe what it feels like to use it because this feeling isn’t strictly related to the object itself, it’s more a question of partiality and appreciation. 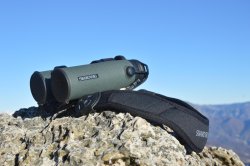 The Swarovski EL RANGE binoculars, one of our hunting companions.

So we’ll just mention a few technical details. After intense use, we can certainly say that, once again, Swarovski with these optics has consolidated its position as a leader in instruments of the highest quality.

The lenses were impeccable from the word go, as was the sharpness of the image.

The same is true of the focusing and the zoom ring. Extremely precise, and there’s also the ballistic program which, once we’d entered the data pertaining to our ammo, gave us the right number of clicks to turn the turret for longer ranges. On the Z5, the parallax correction can be adjusted from a range of 50 metres, and each click changes the impact point by 7 mm at 100 metres.

Last but not least, to face the harshest days with freezing temperatures, climbing to high altitudes with frozen snow covering most of the ground, you need just the right equipment, so our thanks and compliments go to Zamberlan for their boots and Riserva for their backpack.

ALL4HUNTERS made a 4-minute video of our day hunting chamois with Swarovski. Enjoy, and now the hunting season is over, remember the good times you’ve had. Weidmannsheil as they say, good hunting!

For more information on the EL RANGE, ATS and Z5, visit the Swarovski Optik website.

Subscribe to the Newsletter
This article is also available in this language:
DEIT
Click here for more information on the topics:
Swarovski OptikAccessoriesBinocularsHunting accessoriesHunting storiesOpticsRiflescopes
That might interest you too: 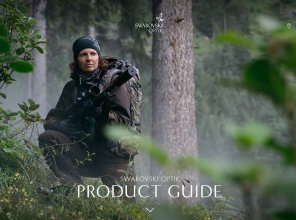 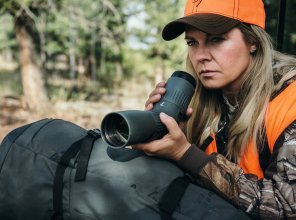 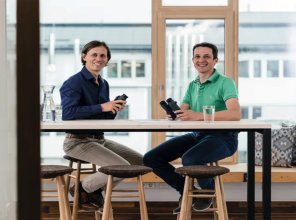 swarovski-optik10/30/2022Swarovski NL Pure: innovative Design, developed from the ground up - Interview with the binoculars designers 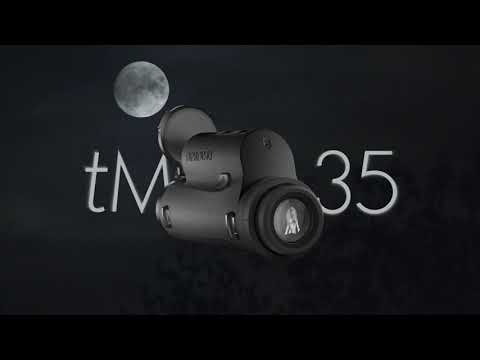 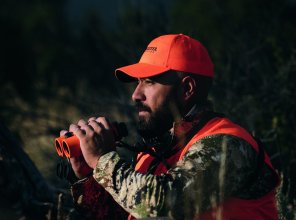 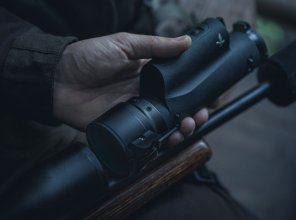 swarovski-optik10/21/2021Swarovski debuts in the Thermal Imaging arena: the tM 35 clip-on and observation system 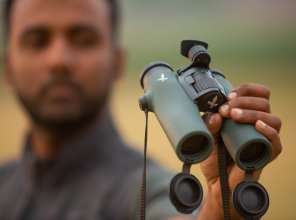 swarovski-optik05/21/2021New: NL Pure 32 from Swarovski Optik – The compact version of the popular binoculars is now available 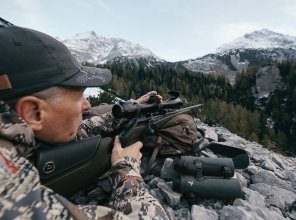 swarovski-optik01/17/2021News from Swarovski Optik: the dS 5-25x52 P scope enters its 2nd generation and a high-tech update for the EL Range binos