#leadfreebuck: Opinions differ widely when it comes to hunting with lead-free ammunition. That’s why RWS ProHunters Maximilian and Janek decided to go buck hunting with the lead-free bullets RWS HIT and RWS Evolution Green to see what it’s all about. You can read the first part of the product test here.

For many hunters, the roe deer rut is one of the highlights of the hunting season, since every so often a large and secretive buck appears out of nowhere and crosses paths with the rut hunter. Particularly in the rutting season, there are often thrilling situations where quick action is required. Suddenly, the bucks come into view, and there’s just enough time to make a deer call, leaving only a few seconds to decide whether to shoot.

Frequently the buck will not offer a 100% profile view, which puts particular demands on the ammunition. Immediate effect and minimal damage to the game – usually at high bullet velocities.  Not a simple task for a hunting bullet, especially if it has to be lead-free. But lead-free hunting bullets do not involve a lot of hocus-pocus – quite the opposite in fact! They actually work extremely well!

Which lead-free ammunition works well for the rutting season?

Two lead-free RWS shots were tested. 10.7 g RWS HIT in .30-06 and 8.8 g RWS Evolution Green, also in .30-06. With them, we managed to take down ten bucks during the rutting season – both from very close quarters as well as from quite a distance away.

RWS HIT: What is lead-free ammunition capable of? 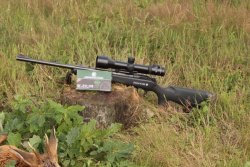 The RWS HIT bullet is a mass-stable deformation bullet with a copper core, which mushrooms and therefore transfers all of its energy in the deer’s body. After hitting the animal, the bullet is mushroom-shaped and retains nearly 100% of its original weight.

The nickel plating has the job of minimizing abrasion in the barrel. This keeps the barrel around 60% cleaner than with conventional copper bullets, making constant wiping and chemical cleaning unnecessary. RWS says that the ammo is suitable for medium-sized to large game, although this bullet is extremely capable during the roe deer rutting season as well. But more on that later. 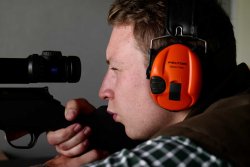 The hunters first tested the bullets on the shooting range.

Before trying it out on a rutting buck, the precision was tested at various distances up to 300 m. The bullet also delivers excellent precision at long distances and was convincing in the Sauer 202 and Blaser R8 test rifles. It therefore promised good results for rut hunting both in a highland forest setting as well as on a field in the lowlands of Lower Saxony.

The first trip started in beautiful Sauerland. The rutting season noticeably got going at the end of July, and the first rutting attempts were underway. The first rutting stand was in a small grove of spruce trees between two storm-damaged areas, where a good six-point deer had been encountered back in May. Roe deer feel particularly at ease in the areas with storm damage, since there is a lot of cover and grazing vegetation here.

The button deer was shot at a distance of just 10 m.

The first call was made softly and cautiously into the adjoining windthrow area, and then there was not much time to react. A deer in full flight shot right towards us out of the storm-damaged area and stopped 30 m away behind a spruce tree, which blocked our view of the animal. With his rifle at the ready, Janek made another soft call with his lips, and then the deer – which we had not been able to see clearly before – approached to distance of 10 m and suddenly stopped. A quick look through the rifle scope confirmed our suspicions: a button buck.  He shot and brought down the animal. From a slightly acute angle, Janek placed the RWS HIT just in front of the right shoulder blade. The copper bullet was directionally stable when it went through the animal and exited again before the last rib. The first rutting buck fell down in its tracks. And that after just the first two deer calls in this season.

When we opened up the animal, we found a destroyed lung and an exit wound that was not larger than a two euro coin. There was hardly any damage to the venison despite the short distance. This surprised us a lot and made us very curious to see the reaction of the next animal. 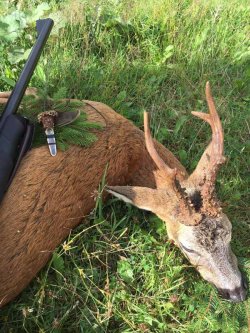 The RWS HIT bullet was convincing at short, medium, and long range.

About a week later, we met in the highlands close to home. The weather had been simply awful for a few days before that. However, the sun coming out after three days of constant rain promised good chances of seeing a lot of roe deer. By 4:15 a.m. on Saturday morning, we were already on the stalking route leading up to the deer stand. While we were still approaching, we saw two deer grazing peacefully in the meadow. However, we were unable to call these two animals in the early dawn, and they retreated into the woods as the light grew stronger.

Once we reached the deer stand, Janek pointed out a smaller yearling to me, which was driving a doe. Now we had to act fast. Huddling at the deer stand, I waited for just the right moment. As the buck briefly came to a standstill with his side facing me, the RWS HIT left the barrel and immediately dropped and killed the buck with a well-placed shot in the high shoulder. It was the same reaction as with the buck a few days before, but at a completely different distance. The perfect result!

Evidently, we could check off both short and long-range distances. At the time we were unaware that we would be able to convince ourselves of the long-range effectiveness just a few hours later.

Third hit at 200 m with the lead-free RWS bullet

On the drive back from the hunting area, I told Janek about a large buck that I could only catch a glimpse of in early June. Since this encounter, it was as if the buck had vanished from the earth, and I had waited in vain for it in the stand a number of times. We made one last, quick stop at a path with a good view and scanned the opposite hillside with our binoculars. And would you believe it? The large buck was 500 m away and moving along the hillside, driving a doe. One look through the 20x magnification of the rifle scope removed all doubt. It was the buck I had been looking for, and the hunt was on! We needed to take a slight detour to reach a deer stand below the storm-damaged area with a good wind and sufficient cover. 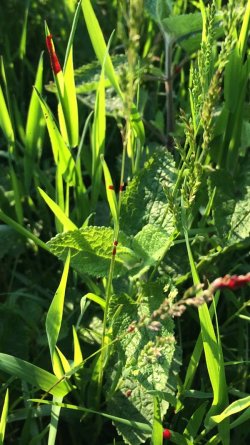 Debris from a lung shot: The RWS HIT bullet convinced the RWS ProHunters beyond a shadow of a doubt.

Shortly before we came up the stalking route and arrived at the deer stand, we saw the buck at the edge of the windthrow area, still driving the doe. We had to react quickly now, or else the two would have disappeared into the adjoining forest. Somewhat out of breath, I carefully opened the door to the deer stand. However, even though this large buck was so focused on the doe, he still heard me open the door and immediately looked in my direction. On reflex, I took up my rifle, huddled in the open door, and placed the red dot in the middle of the buck’s shoulder blade. Even before the buck jumped away, he was hit by the bullet and clearly reacted to the shot.

“Well?” Janek asked from below. I was sure of my success. After around 20 minutes, I started looking for where I had hit the deer. Janek stayed at the deer stand and guided me precisely, since keeping your bearings is incredibly hard in these huge storm-damaged areas. Once I reached the spot where I had hit the deer, I was very relieved, since I immediately found a lot of debris from the lung shot – and then the dead buck not even 10 m away. Now it was certain: the HIT had convinced me beyond a shadow of a doubt. 3 shots at 10, 80, and finally 200 meters with almost the exact same effect. And there was hardly any damage to the venison, as well as good stalking signs. Just the way it is supposed to be!

A video with the features of the RWS HIT bullet:

Hunting in rutting season: Demands on the ammunition

These three situations illustrate that the demands on the ammunition are very high in rutting season. Short-range to long-range shots at generally excited and hard-to-shoot game in the rutting season. Moreover, very little damage to the venison and short flight distances. All of these features are combined in the lead-free HIT bullet by RWS.

Read how the RWS Evolution Green in .30-06 performed very soon at all4hunters.com!

Do you want to tell us about your hunting experiences with lead-free ammunition? Then upload them to Instagram under #bockaufbleifrei.

We will be glad to answer your questions at any time!

Subscribe to the Newsletter
This article is also available in this language:
DEIT
Click here for more information on the topics:
RWS ammunition.30-06 SpringfieldAmmunitionHuntingHunting ammunitionLead Free ammunitionTest
That might interest you too: 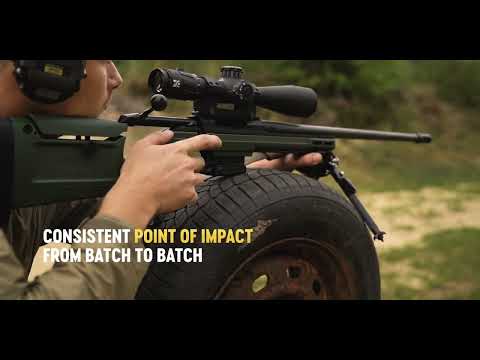 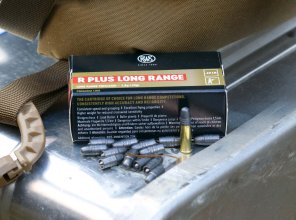 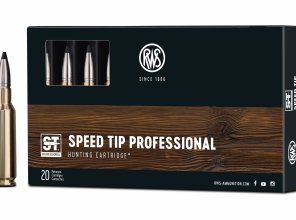 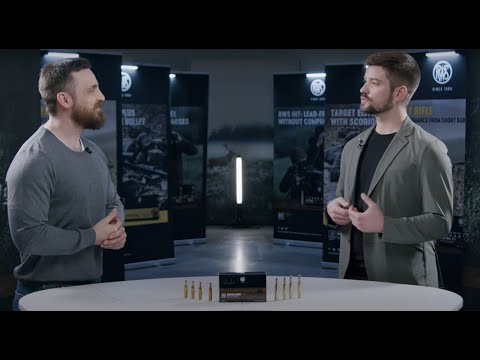 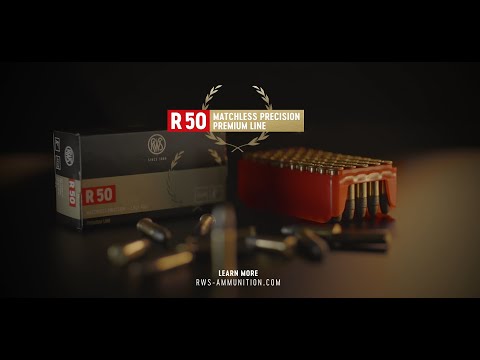 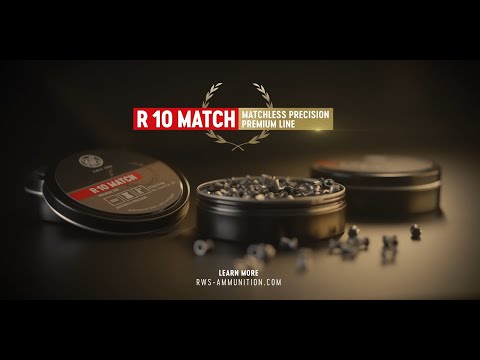 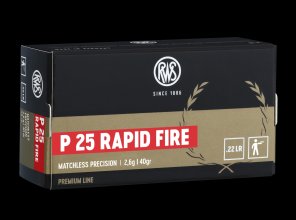 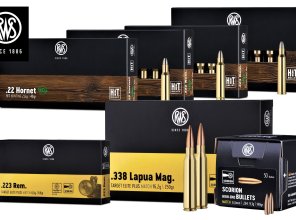